​So, as Charlie Kelly once quipped in the sitcom ‘It’s Always Sunny in Philadelphia’…what do now?

Mauricio Pochettino has been ​sacked by Spurs after a lengthy period of unrest that included losses to Colchester United and Bayern Munich, but also the Champions League run that saw the side reach the competition’s Madrid final.

During his time in north London, Pochettino made the Lilywhites Champions League regulars and also enjoyed Premier League title challenges during the 2015/16 and 2016/17 seasons. The mark he has left at Tottenham will last a long time. That is unless Jose Mourinho comes in and destroys the new stadium with his cynicism and general moodiness. Who knows, eh?

Anyway, here’s a statistical look at what Poch achieved at Tottenham, all courtesy of ​Opta.

The Very Best…Well, Bar the Special One Before the 2019/20 game, Pochettino had the best points per game record of any Spurs boss in Premier League history.

However, the poor start to the current campaign has seen him drop behind the man he took over from, Tim Sherwood. He had a great 53% win ratio, if you hadn’t heard. It is, again, second to none.

Poch stands at 1.89, with Sherwood ahead on 1.91. Pochettino also took charge of more Premier League games than any other Spurs manager, with 202 matches, but in no previous season have Tottenham been lower in the table at this stage of the season than they are this term.

Also, only three managers oversaw more games in Tottenham’s dugout than Pochettino. He, with 293, is behind Bill Nicholson (832), Peter McWilliam (505) and Keith Burkinshaw (431). 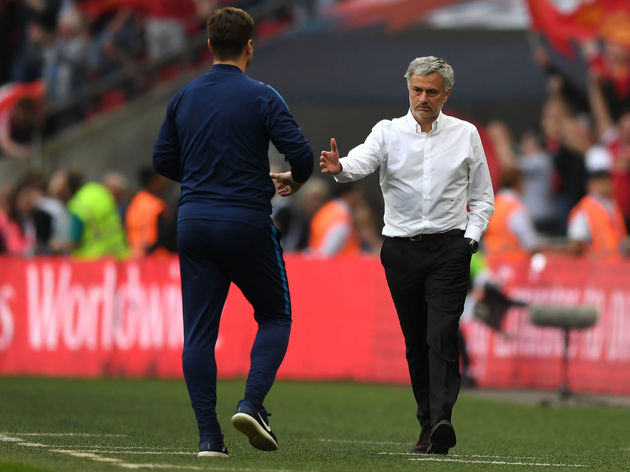 The 2014/15 season, Pochettino’s first at Tottenham, was a little rocky, but there was enough in victories over Chelsea and Arsenal to see the Argentine had the right idea.

Things improved dramatically over the next two seasons, helping Pochettino to a quite neat record in his first 100 league games with the club.

Only Jose Mourinho with Chelsea and Alex Ferguson with Manchester United reached 100 victories in the Premier League in a shorter amount of time. Pochettino brought up his ton in 169 fixtures, Mourinho sits atop the pile with 142, while Ferguson managed the feat in 162.

Disappointing in the Big Six League Pochettino oversaw a number of memorable victories against the Premier League’s other top five teams, namely Manchester United, Manchester City, Arsenal, ​Chelsea and ​Liverpool. The 5-3 triumph over Chelsea, the 4-1 win over Liverpool and the 2-1 victory at Manchester City stand out in particular.

However, only ​Arsenal (51) picked up few points in games between the so-called big six than Tottenham (60).

Since August 2014, Tottenham have lost more Premier League games against fellow big six sides than any other team in this period (23). Perhaps what Tottenham fans will remember the most about Pochettino’s reign in north London is the somewhat ridiculous run to the ​Champions League final last season.

That run saw the 47-year-old become just the third Tottenham manager to take the club to a major European final. He ended up taking charge of 53 games in Europe, just two behind leader Nicholson.

The Crumble That Cost Him His Job However, while the run in Europe was somewhat amazing, it did hide a few domestic cracks that had started to emerge since the beginning of 2019.

No Premier League side has lost more games in all competitions than Pochettino’s side (18). ​Tottenham last lost more games in 2008, when they suffered defeat 19 times during separate spells under Juande Ramos and Harry Redknapp.