Historically speaking, the best players in football tend to come from either Europe or South America.

There’s no escaping that. Never has there been a World Cup winner from another continent, nor has there ever been a Ballon d’Or winner hailing from Africa, Asia, North America, or anywhere outside the two places we most intrinsically associate with football.

And yet, despite that, there has been no shortage of world class African players who have graced the ​Premier League. 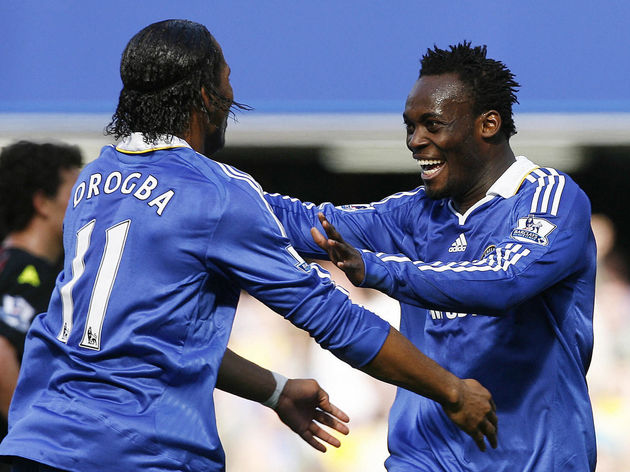 From the Touré brothers to Didier Drogba to Riyad Mahrez to Mohamed Salah, the modern era of England’s top flight has been seasoned with a flavour of African talent, and the diversity provided has helped grow the division into the globally-reaching behemoth it has become.

Such is the standard set by his continental counterparts in the Premier League, then, it was always going to take some doing for a humble, understated forward, who made his breakthrough in Austria before being spotted by Southampton, to stand out among them.

And yet that is exactly what ​Sadio Mané is doing.

What an unbelievable player Sadio Mané is, by the way. Everything he touches turns to gold. In the form of his life.

Chelsea fans will undoubtedly point to Drogba as the ​Premier League‘s greatest ever African, but since signing for ​Liverpool, Mané’s 72 goals in 144 games outpace the 164 in 381 that the legendary Ivorian managed while at Stamford Bridge.

Yaya Touré, of course, was one of the best midfielders to ever set foot in the Premier League, and won more major honours in his eight years with Manchester City than Mané has yet with Liverpool. Yet there’s no escaping the fact he was 29 by the time he lifted his first Premier League trophy; Mané may be about to do so shortly after his 28th birthday, having already claimed a Champions League winner’s medal.

Perhaps the most pertinent comparison comes with his teammate Salah, next to whom the former Southampton man’s strike rate paled in comparison after the Egyptian’s clinical first season at Anfield. On goals alone, at face value, there’s a case for Salah as the superior player. 63 goals in 100 Premier League games, after all, is a feat very few in history have ever bettered.

Yet, if you compare the two over the last two seasons, then it’s difficult to split them. Since the start of the 2018/19 campaign, in fact, their records are virtually inseparable; 37 goals in 62 games for Salah and a marginally better 39 in 63 for Mané.

Aside from Salah’s first season, then, which was an outlying phenomenon even despite his stellar record since, there is nothing to suggest that he has been the better of the duo – who, in truth, are better thought of as two parts of a package rather than individuals. When you compare the two in 2019, though, it is in fact Mané who comes out on top, and by some distance. The Senegalese’s 30 goals in 46 games this calendar year comes close to dwarfing the 21 in 44 that Salah managed, suggesting that it is in fact he who, as things stand, is the Reds’ most influential attacker.

That was evidenced in the ​Ballon d’Or rankings, that put Mané fourth and Salah fifth, and it was reflected in Jurgen Klopp’s thinking for last week’s derby with Everton, with Mané picked as the one un-droppable cog of the front three, while Salah and Roberto Firmino sat out from the start.

And as he does, he came up trumps. Scoring once and registering two picture-perfect assists, he showed exactly why his pace, work-rate and meticulous nature make him so highly valued by Klopp, and why he is, on current form, the best African player in the Premier League.

As debates go, it’s a reasonably redundant one. It’s nigh-on impossible to say which of the duo are the better player, given the vastly different roles they play in the Liverpool team; one essentially a relentlessly effective wide poacher, while the other functions to drive the team forward with his electricity and dynamism.

It’s similarly silly to compare either, really, to Drogba, who was one of the most effective centre-forwards the league has ever seen, or either of the Touré brothers, or even Michael Essien.

There has been no shortage of incredible African talent in the Premier League, each bringing their own distinct strengths and providing their own share of accolades and fond memories. But if things keep going as they are for Mané, then he will undoubtedly be remembered as one of the very best; up there with any player, African or otherwise, to have set foot in England.

A Premier League title this season would go some way to cementing that status in stone, and if the goals keep coming for Mané as they have so far, then that’s fast beginning to look like a formality.

Senegal and Ivory Coast have been chosen to compete in the 2022 African Nations Championship.

Senegal and Ivory Coast have been chosen to compete in the 2022 African Nations Championship.

October 2, 2022
Mikel, a former Nigeria captain and Chelsea midfielder, has announced his retirement.

Mikel, a former Nigeria captain and Chelsea midfielder, has announced his retirement.

September 28, 2022
Williams is given his first Ghana call-up as the Black Stars prepare for the Qatar 2022 World Cup.

Williams is given his first Ghana call-up as the Black Stars prepare for the Qatar 2022 World Cup.