​Manchester City kicked off their title defence in style with a 5-0 win on the road to West Ham United, moving level on points with Liverpool at the top of the Premier League table.

Both sides took their time to find their rhythm, and while West Ham enjoyed more of the ball in dangerous areas, it was City who threatened with long-range efforts from Riyad Mahrez and David Silva.

As the first-half started to liven up, Kyle Walker showed off his athleticism to create space on the right-wing and the England international teed up Gabriel Jesus, who sneaked in front of Fabián Balbuena to break the deadlock at London Stadium.

Chances were few and far between throughout the rest of the first-half, but shortly after the break a surging run from Kevin De Bruyne opened up space for Raheem Sterling on the left side who slotted the ball underneath Łukasz Fabiański to double their lead.

Sterling then turned provider for Jesus to round off a stunning team move, but the Video Assistant Referee intervened and chalked the goal out for offside – even though on second viewing it appeared only the England international’s arm was beyond the last man.

Ederson was then called into an outstanding double save to keep out shots from Javier Hernández and Manuel Lanzini, while at the other end Sterling raced onto Mahrez’s through ball to score City’s third of the match with a nonchalant chip.

Mahrez was then involved soon after to win City a penalty, but substitute Sergio Agüero fired an awful penalty straight at Fabiański. Fortunately for City, the VAR ordered the spot-kick to be retaken which the Argentine made no mistake at the second time of asking.

Sterling then rounded off the scoring to complete his hat-trick, latching onto the end of another pass from Mahrez before rolling the ball past a helpless Fabiański.

Many are wondering what the future holds for West Ham in the wake of Marko Arnautović’s move away from east London, but club-record signing Sébastien Haller has offered an immediate response and, for some, even an upgrade. The Frenchman doesn’t possess the same match-winning, individual quality that at times carrier the Hammers through tough periods, but Haller offers a significant improvement in technical ability, as well as fantastic link-up play with the likes of Felipe Anderson.

Chances were few and far between for the former Eintracht Frankfurt striker against the reigning Premier League champions, but West Ham fans will be confident that they will cause most teams problems if they can match the same level of performance.

Although all eyes were understandably on Sébastien Haller – he was certainly West Ham’s best player for some – it’s the return of Argentina international Manuel Lanzini that provided the biggest sign of promise for the weeks ahead.

He had a quiet second-half overall, but Lanzini took the game by the scruff of the neck during the opening 45 minutes and offered a constant threat for Manchester City to try and contain.

While Pablo Fornals’ arrival could see chances become less over the next few months, The Argentine’s availability this season will certainly prove to be vital in their hopes of returning to European competition next season.

It wasn’t vintage from the Premier League champions even with the scoreline, but Manchester City proved their championship material once again with a convincing win in east London. 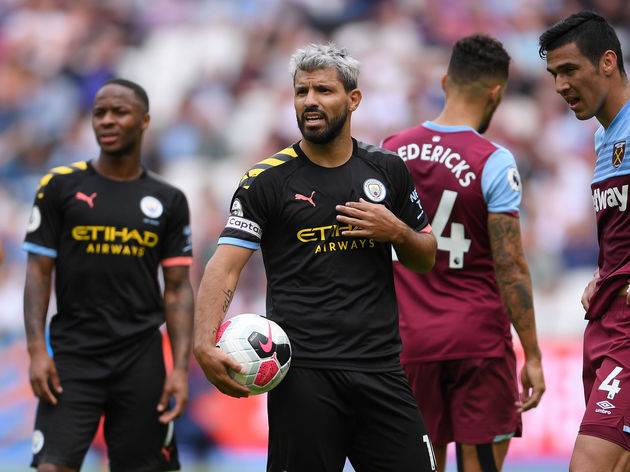 Not only was Pep Guardiola’s side unstoppable when they started strutting their stuff in the attacking third, but City also escaped largely unscathed against one of the most exciting attacking lineups outside the Premier League’s big six.

Yes, Sterling scored a hat-trick and Manchester City’s attacking players will grab the headlines, but their goalscoring spree was only made possible thanks to a piece of athleticism by Kyle Walker.

The England international, who could soon be on the bench after João Cancelo settles in, left Aaron Cresswell in his wake in the build-up to City’s opening goal, also delivering a perfect low cross which Gabriel Jesus expertly converted.

He also offered the likes of Michail Antonio and Felipe Anderson few chances down his side of the pitch, putting an almost perfect performance which is sure to give Guardiola more than a few selection headaches over the next few weeks.

Manchester City take on Tottenham in their first home match of the season next weekend, while West Ham will hope to get some points on the board on the road to Brighton & Hove Albion.