Southampton have come a long way in the last ten years.

The Saints started the decade with a 1-1 draw at Millwall, when they sat 13th in the third tier of English football. Assuming they hold their current position, the south coast side will end the decade above the relegation zone in the Premier League, 40 places and two divisions higher in the footballing pyramid.

Southampton’s success is not only clear through their ascent up the leagues, but through their player sales, as almost every member of their ‘Team of the Decade’ was bought by another Premier League side.

And while it previously seemed that the constant squad overhaul had little to no effect on the Saints, the continuous exportation of talent has finally caught up with them in the form of two relegation-threatened seasons.

But we’re here for their ‘Team of the Decade’, so let’s avoid the likes of Dani Osvaldo and Guido Carrillo to recap the best players to have worn the Southampton jersey in the 2010s. 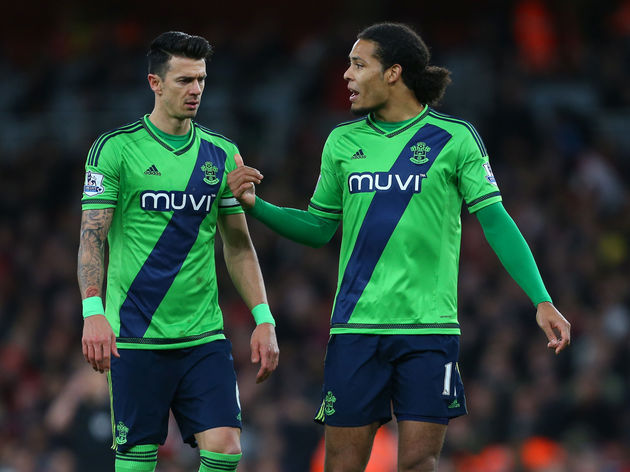 Fraser Forster (GK) – The England international was one of the most dominating goalies in the league. His 6’7 frame quite literally filled the goal for over 100 Premier League matches as he kept 37 clean sheets, more than double the tally any other ​Southampton goalie can point to in the past ten years.

Nathaniel Clyne (RB) – In his three seasons with Southampton, the dependable right back only missed five games through injury, providing defensive solidity and cover for the winger in front of him. By the time he swapped St Mary’s for Anfield, he had broken into the England team and was part of the squad for the 2016 Euros.

José Fonte (CB) – The imperious Portuguese centre half can lay claim to being the only player to have won the EFL Trophy and European Championship. Both of these honours came while he called Southampton home. When Liverpool bought Dejan Lovren in 2014, many Southampton fans breathed a sigh of relief as they believed the Reds had pilfered the wrong centre back.

Virgil van Dijk (CB) – Perhaps the most obvious name on the list, the Dutchman showed patches of his extraordinary ability in red and white stripes but his game has undoubtedly improved greatly under the tutelage of Jürgen Klopp.

Ryan Bertrand (LB) – Only two players have made more appearances for Southampton in the top flight this decade than Champions League-winning Bertrand. Since his arrival in 2014 – initially on loan before it was made permanent a year later – the 30-year-old has been nearly ever-present for the Saints as their attacking and ever-willing outlet on the left. Victor Wanyama (DM) – The first Kenyan to play in the Premier League, Wanyama became one of the league’s best ‘destroyers’ as he flourished under Ronald Koeman. Like so many of the names on this list, his performances were so good he attracted the attention of other Premier League sides. If you can forgive his final season at the club, which saw him pick up three red cards in the space of 13 games, he was undoubtedly one of Southampton’s best midfielders of the decade.

Morgan Schneiderlin (DM) – The imposing defensive midfielder was picked up from Strasbourg in 2008 for less than £1.5m. The Frenchman always had a cool head and long, raking passes up his sleeve to unleash the quick attackers out wide.

Steven Davis (CM) – Only James Ward-Prowse made more Premier League appearances for Southampton than their former captain this decade. The Northern Ireland international knitted everything together in the centre of the park as his industry and work ethic laid the ground work for the team’s more attacking players to excel. Adam Lallana (RW) – For a player they only paid £18,000 for in 2006, Lallana must represent one of the biggest bargains in Southampton’s history. An incredibly elegant player at ease with either foot, ​Lallana – with his surname and skills – brought a continental flair to St Mary’s that has been sorely missed since his 2014 departure.

Rickie Lambert (ST) – Only one name could have spearheaded this team and Lambert is more than deserving of his place in the roster. In four of his five seasons at St Mary’s, spanning three divisions, Lambert was the club’s top scorer, talisman and hero.

Sadio Mané (LW) – Possibly the most talented player in this team, ​Mané has, much like Van Dijk, evolved into an even better player since leaving Southampton. However, he will forever be written into Southampton and Premier League history books as he plundered the fastest hat trick in the competition’s history whilst in the red and white strips of the Saints.