Milan were the architects of their own downfall in Sunday’s 2-1 defeat at Stadio Olimpico, gifting Roma two goals in a dire defensive display.

Lucas Paqueta thought he’d given Milan the lead in the 16th minute, but he’d timed his run too early for Franck Kessie’s excellent through ball and it remained 0-0. Both sides tried their luck from distance, drawing good saves from Pau Lopez and Gianluigi Donnarumma, but clear-cut chances were at a premium in a cagey opening period.

The first half was sparked into life in the 38th minute when Edin Dzeko headed the hosts in front. Nicolo Zaniolo’s ferocious long-range strike was well saved by Donnarumma, but Milan inexplicably offered the Bosnian space at the back post from the resulting corner, and he obliged from a flick-on.

On another day, Dzeko might have found himself heading for an early bath – the Roma captain’s shove on Mateo Musacchio sent the Milan defender to the ground – but he went unpunished.

The Rossoneri were level in just ten second-half minutes courtesy of their full-backs combining. Theo Hernández plucking Davide Calabria’s cross from the air and tucking home via a Chris Smalling deflection, but more generous Milan defending meant they were 2-1 behind in just three minutes. Zaniolo was the beneficiary of Calabria’s wayward pass on this occasion, and he curled beyond Donnarumma.

Roma could and should have helped themselves to two further goals after Milan gifted Smalling and Gianluca Mancini free headers from second-half corners, but neither could find the back of the net.

Stefano Pioli named an unchanged side for his second game in charge, meaning there was no place for top scorer Krzysztof Piatek. Rafael Leao was charged with leading the line once again and endured a difficult evening plagued by poor positioning and decision making.

He found himself isolated in the first half, but did himself no favours with his reluctance to get into the box and tendency to drift into wide positions. On the rare occasion that he got into the Roma area and found Milan players closer to him, chances were created, highlighted by his 12th-minute shot after Hakan Calhanoglu’s flick, but the wrong pass or a poor shot were often the outcome.

​It was surprising that it took until the 63rd minute for Piatek’s introduction, which moved Leao to the left flank and finally gave Milan a focal point. Sadly the service just wasn’t there for the Poland international, who hardly touched the ball inside Roma’s box.

In fairness to Leao he looked far more comfortable playing on the left and it wouldn’t be a surprise to see him starting the next match in a wide area, with Piatek leading the line.

Theo Hernandez was head and shoulders above his teammates on Sunday evening, reliable in defence and arguably Milan’s best attacking option.

The French left-back must have covered every blade of grass on the Stadio Olimpico flanks, constantly driving his team forward and overlapping the wide players ahead of him. It paid off in the 55th minute as he timed his run into the box perfectly, controlled the ball with one foot and tucked home with the other. 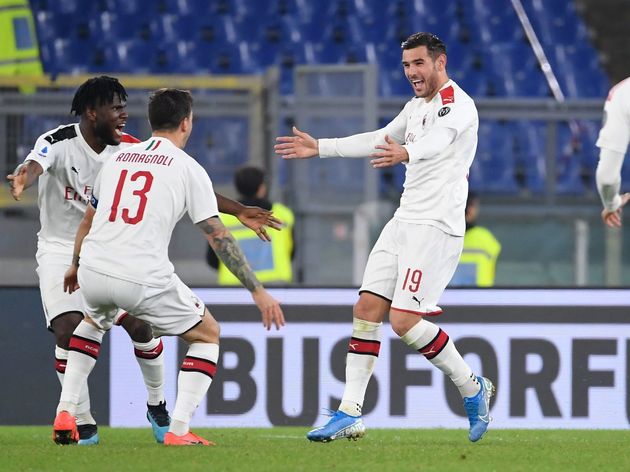 His performance was typified by a move to start a counter-attack with Milan searching for an equaliser. He intercepted a cross before it reached Dzeko, beat two Roma players and laid the ball off for Leao while being fouled. Sadly it ended with a free kick for a foul on Leao, but his endeavour and energy that were the most telling parts of the move.

Roma face Udinese and Napoli in Serie A action, before their Europa League visit to Borussia Monchengladbach. Milan face SPAL at home on Thursday before three difficult fixtures – Lazio, ​Juventus and Napoli await the Rossoneri in November.