Karim Benzema grabbed a double as Real Madrid defeated Levante 3-2 to take them to eight points after four rounds of the new season.

Visiting goalkeeper Aitor Fernandez was in sparkling form as he pulled off an acrobatic stop to prevent the Frenchman opening the scoring with a delicious curling effort. The 28-year-old was called into action again soon after, tipping a near-post drive from Lucas Vazquez onto the woodwork. Unfortunately for Las Granotas, he was powerless to prevent Benzema heading ​Real into the lead midway through the first-half, the striker meeting a deft cross from Dani Carvajal to head home his third ​La Liga goal of the season.

Moments later, the advantage was doubled and so was the Frenchman’s tally for the day. A lightning-speed counterattack saw the ball fall to the feet of James Rodriguez, the Colombian sliding a neat pass through to his teammate, who sent Fernandez the wrong way with a composed finish.

Victory was seemingly wrapped up before the break when Casemiro – who had been playing superbly as Zinedine Zidane’s midfield anchor – guided Vinicius Junior’s low delivery underneath the scrambling ‘keeper.

Borja Mayoral – on loan from Madrid – redirected a Carlos Clerc cross past Thibaut Courtois as they second period got underway, though Benzema went close to claiming his hat-trick on the hour as his fierce attempt rattled off the post and out.

Summer signing Eden Hazard came off the bench for his debut immediately after, the forward involved as Vinicius blasted in, only to see his effort ruled out for offside.

Wayward finishing kept Levante in the game and they reduced the margin with a quarter of an hour left, Gonzalo Melero grabbing a second for his side, though they ultimately fell short in the search for an equaliser.

Levante are not top-level opposition and yet Real still failed to collect a comfortable win as they allowed their opponents a route back into the contest.

Their last home match was a 1-1 draw with lowly Valladolid, with supporters highly critical of the all-round display and demanding Madrid made amends. They will not be at all satisfied with the slender victory over Las Granotas. Zidane would have been mightily relieved at half-time as he readies his recruits for a ​Champions League clash with Paris Saint-Germain on Wednesday evening. A sour atmosphere is the last thing the coach wants as he takes his squad to France for a pivotal encounter.

A woeful second-half performance means the pressure is still on him and his team, something they could have done without as they prepare for the showdown with PSG.

Strikers are paid to score goals and score goals is precisely what Benzema did. Both his efforts showed the skill and poise of man full of confidence and hungry for more.

The rest of the team may be faltering, but the frontman continues to shine in a dark period for his club, hitting a brace and linking play well. 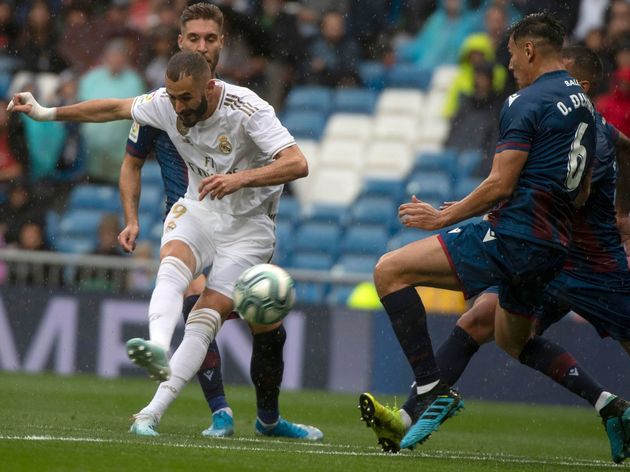 A fine header broke the deadlock as Benzema rose highest to nod beyond Fernandez’s reach, the 31-year-old then nabbing a brace with an accomplished finish when through one-on-one.

The floor is his critics. pic.twitter.com/D94siCq3j7

Real’s next domestic fixture is an away match at Sevilla on Sunday, though they lock horns with PSG four days prior as they get their European campaign underway.

Levante welcome Eibar to Estadi Ciutat de Valencia on the Saturday before taking on Real Betis the following Tuesday.