Paris Saint-Germain booked their place in the quarter-finals of the Champions League as they overcame Borussia Dortmund 2-0 at the Parc des Princes on Wednesday evening in a game that was played behind closed doors. ​

The hosts started brightly, but the first chance of the game actually fell to the away side. The ball was cut back to Jadon Sancho on the edge of the area, but he fired wide. However, Edinson Cavani was sent through on goal midway through the first half. It appeared as though the net would ripple, but his low drive was well saved by Roman Burki.

PSG did then take the lead through Neymar just before the half hour mark. Angel Di Maria whipped in a sensational cross from a corner, which the Brazilian powerfully met with a header. Juan Bernat then doubled his side’s lead just before the half time whistle, his low shot creeping in.

Di Maria forced Burki into an exceptional save early in the second half, the Argentine curling a free-kick towards goal from far out. With just one minute of normal time remaining, Emre Can was sent off after he fouled Neymar and then the pair came together after. PSG were able to see out the contest and book their place in the last eight.

Here’s the breakdown of the game…

Thomas Tuchel had a selection dilemma ahead of kick-off, with Thiago Silva ruled out while Kylian Mbappe had been struggling with illness in the build up to the contest. As a result, Marquinhos dropped into the defence, and Pablo Sarabia moved into the attack. Despite the fact they were playing without a crowd in their own stadium due to the coronavirus, the hosts started brightly as they looked to find the opener – a goal that would put them ahead in the tie. As the half progressed, PSG dominated possession and although the game was played at a slow tempo with little intensity, the home side will not have cared because they were completely in control.

They were managing the game and the tie brilliantly. While Dortmund did attempt to fight back in the second period, Tuchel’s men were in control throughout. They continued to keep their opponents at bay, and continued to look dangerous each time they went forward. In the end, they were good value for their win and they now have a quarter-final tie to look forward to.

When they needed him most, he stepped up.

The Brazilian went down early on in the clash and it appeared as though he would have to go off, but he was able to overcome the injury and continue – and PSG fans will have been very thankful for that. Midway through the first half, he opened the scoring for his side. Perhaps it was a low drive or some nice skill to set himself in the build-up? No, instead it was actually a low diving header.

He continued to impose himself on the game after, and while he looked a threat each time he received the ball, it was his defensive work that was most impressive.

An excellent display and he can now look forward a quarter-final with PSG.

Neymar just did Haaland’s celebration against Dortmund. A king.

A place in the quarter-finals of the ​Champions League was up for grabs for ​Dortmund, and they went into the game holding a slender lead from the first leg. However, based on their overall performance, it didn’t seem like they were playing for a place in the last eight of Europe’s elite competition. 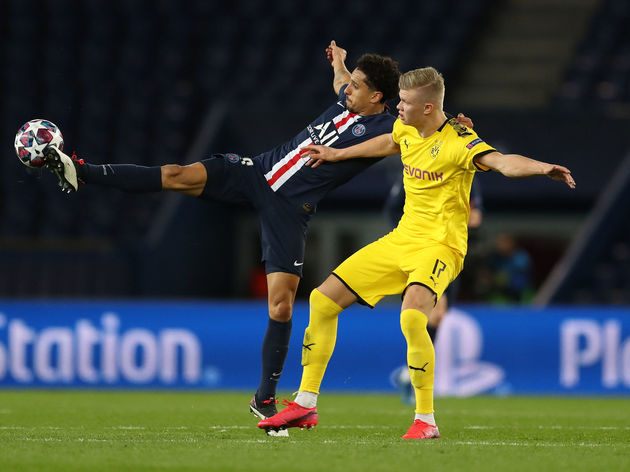 Of course, the game was being played without a crowd and this certainly appeared to affect the Bundesliga outfit, who were sloppy and sluggish and, as a result, they really struggled to get into the contest. The worst part was that both goals conceded in the first half simply should have been dealt with.

Dortmund did show some spirit and fight in the second half, but they still failed to really trouble Keylor Navas in the PSG goal. With so much up for grabs, it was a hugely disappointing display.

Wouldn’t surprise me if Haaland gets sent off here. On a yellow, isolated and getting frustrated. #UCL

Was it his best game? No, not at all. However, it was a majorly disappointing display by Dortmund, looking fragile at the back and void of ideas in attack. And while he wasn’t able to impact the game in the way he would have liked, the young Englishman was constantly looking to get on the ball and try and make things happen. Sancho would drift all over the pitch, starting on the right before switching to the other flank and trying his luck. The 19-year-old was always at the heart of anything promising for his side, but unfortunately for him, his side weren’t able to find their way into the contest.

PSG next host Nice in the league on Sunday before facing Strasbourg.

Dortmund return to league action on Saturday as they host Schalke. They then travel to take on Wolfsburg the following weekend.