Arsenal edged a tight encounter with Greek outfit Olympiacos in the first leg of their Europa League last 32 tie on Thursday evening, with Alexandre Lacazette’s goal gifting the visitors a 1-0 win.

While the Gunners were favourites heading into the match, their hosts could well have taken an early lead, Mathieu Valbuena stinging Bernd Leno’s palms after just two minutes, before Georgios Masouras headed over from close range moments afterwards. Arsenal themselves could have had an opener just before the 20-minute mark, but Lacazette blasted wide following a lovely move.

There was little more than half-chances for either side as the half progressed with neither team managing to find a breakthrough before the half-time whistle. Arsenal had controlled proceedings for the most part, and were edging closer towards a crucial opener – and away goal.

The second half struggled to ever get out of second gear, with both sides regressing and looking fairly flat-footed going forward. Ousseynou Ba had the first real opportunity after the break – 25 minutes in to the second half – but his header was well saved by Leno, despite the flag eventually going up, while the German also kept out a well-hit free kick from Valbuena.

Eventually, Arsenal found a crucial opener, Lacazette tapping in Bukayo Saka’s wonderful low cross, and putting some gloss on a relatively lifeless Arsenal performance ten minutes before the final whistle. The Frenchman could have doubled his tally minutes afterwards, but he was unable to round off a sweeping Arsenal counter-attack, while Sokratis’ header from the resulting corner ricocheted off the bar.

But the visitors were unable to add to their slim advantage, taking an important cushion and away goal back to north London for the return leg.

​Arsenal would have been aiming to build on their impressive 4-0 victory over Newcastle last weekend, while recognising that the Europa League may be their most realistic avenue in to the ​Champions League next season – something that was evidently apparent to Mikel Arteta with his strong team selection.

The Gunners did well to weather the early storm from their energetic hosts, although at times it was luck rather than judgement that saw them through the opening stages unscathed. Arsenal continued to grow in confidence with every passing minute, but seemingly found it difficult to break through an unwavering Olympiacos defence, despite controlling the game with relative ease. 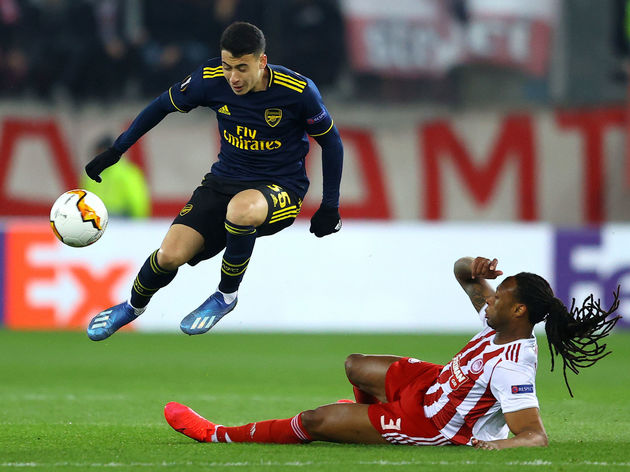 While Arsenal’s defensive improvements under Arteta were clear for all to see on Thursday night, there was a serious lack of spark in the final third, with the Spaniard’s new-look system somewhat stifling the Gunners’ capacity to carve open their hosts. Pierre-Emerick Aubameyang didn’t look comfortable on the right flank, while Lacazette offered little in the way of end product or creativity – despite scoring Arsenal’s only goal of the game.

Eventually, persistence and a little bit of flair from Saka paid off for the visitors, who will sneak a one-goal cushion back to the Emirates in a week’s time. However, it was far from a convincing showing from the Gunners, who rode their luck at times and put in a fairly timid and uninspiring performance, despite stealing a great result. It certainly wasn’t a vintage Arsenal display, with many household names underperforming on their return to European action. As a result, the best of a pretty average bunch was young Saka at left-back, who dealt with the attacking threat of Olympiacos with relative ease.

The starlet looked confident in possession as well, spearheading a number of deadly looking Arsenal attacks down the left-hand side – showcased perfectly by his sumptuous cross that provided the assist for Lacazette’s goal.

Olympiacos travel to PAOK for a top-of-the-table clash in the Greek Super League this weekend, while Arsenal play host to ​Everton this Sunday in the ​Premier League.

The two sides will meet again at the Emirates for the return leg next Thursday evening.