​It’s fair to say that ​Newcastle have had some ups and downs during this decade under Mike Ashley’s ownership.

They came into the decade in the Championship but were swiftly led back to the top flight under Chris Hughton. They managed to reach a Europa League quarter-final under Alan Pardew but soon found themselves back in England’s second tier.

With Rafa Benítez in charge, the Magpies came straight back up to the top flight and they have remained there ever since, finishing tenth and 13th in the process. However, Rafa eventually left after becoming disillusioned by the board, with Steve Bruce coming in as his successor.

It’s been turbulent to say the least. And having considered all of that, here is Newcastle’s team of the decade. Tim Krul (GK) – Krul will probably go down in footballing history for his penalty heroics with the Netherlands – but he had a good career at Newcastle. He spent 11 years with the Toon, making over 180 appearances having broken into the side under Alan Pardew at the start of the decade.

Daryl Janmaat (RB) – Another Dutch player who plied his trade for the Magpies during the decade. Janmaat only spent two seasons on Tyneside after signing a six-year deal but impressed with his attacking runs from right back. He was part of the 2015/16 side that got relegated.

Fabricio Coloccini (CB) – A modern day Newcastle legend. The bushy-haired Argentine became a firm fan favourite at St James’ Park due to his defensive efforts and fearless challenges. He spent eight years at Newcastle, appearing in 275 games, and was selected in the PFA Team of the Year in 2011/12.

Jamaal Lascelles (CB) – Current club captain Lascelles established himself at Newcastle during their most recent spell in the ​Championship. He has been a constant presence since breaking into the first – except for in recent months due to injury. At only 26, he is likely to add many more appearances to his 133.

José Enrique (LB) – Enrique was a class act both on and off the pitch. He spent four years with Newcastle but his impressive performances earned him a move to Liverpool. He amassed almost 130 for the Toon and was a constant attacking presence down the left flank. The most important result for him this decade was fighting off a brain tumour in 2019. Hatem Ben Arfa (RM) – What a player Ben Arfa could’ve been. He certainly showed some of his best bits while wearing the black and white of Newcastle. Everyone remembers that​ goal against Bolton in 2012 when he seemed to beat their whole team. Scored 14 times in 86 appearances before moving back to France.

Yohan Cabaye (CM) – Another talented Frenchman who was certainly at his best during his time with Newcastle. Cabaye quickly became one of the best players in the Premier League and was constantly controlling Newcastle’s team from the centre of the park. He bagged 18 goals in 93 games prior to a big career move to PSG.

Cheick Tioté (CM) – Tioté will forever be remembered for scoring Newcastle’s fourth goal in their 4-4 comeback draw at home to Arsenal. He was so much more than that. A tough tackling defensive midfielder who would let the opposition know they were in for a long 90 minutes. Made over 150 appearances for Newcastle, scoring once, and sadly passed away in June of 2017.

Jonas Gutierrez (LM) – The Argentine almost single-handedly kept Newcastle in the ​Premier League during the 2014/15 season, when he assisted and scored on the final day in a 2-1 win over West Ham. He spent seven years with the team, playing over 200 games but most importantly defeated testicular cancer in 2014. 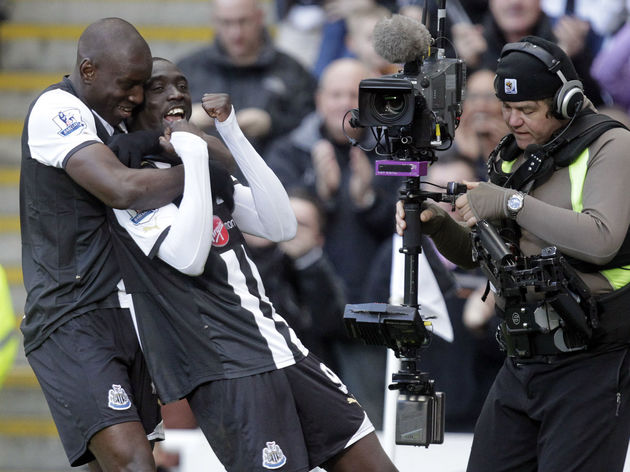 Demba Ba (ST) – The Senegalese striker struck fear into Premier League defences whenever he led the line for Newcastle. He was absolutely lethal in attack, especially alongside Papiss Cissé, scoring 29 goals in just 54 Premier League game on Tyneside before earning a big move down south to Chelsea.

Papiss Cissé (ST) – This strike partnership was the thing of dreams for Newcastle fans. Two talented Senegalese strikers leading the line and scoring goals for fun. Joining in January of the 2011/12 season, Cissé scored 13 in his first 14 Premier League games as Newcastle finished fifth. He reached a total of 37 during his five year spell – including that volley over Petr Cech against ​Chelsea.