Manchester City recorded their 250th Premier League win of the decade as a Riyad Mahrez masterclass helped them defeat Leicester City 3-1 at the Etihad Stadium.

Kevin De Bruyne sent out early warning signs as he terrorised the Foxes. The Belgian powered his way through the heart of the visitors’ team before freeing Raheem Sterling, with Jonny Evans required to deny the winger. City’s talisman was at it again minutes later, whipping a low effort into the base of Kasper Schmeichel’s post.

The ​Sky Blues had dominated the opening 20 minutes, but found themselves trailing as Jamie Vardy motored away from Fernandinho and dinked a delightful shot over the onrushing Ederson.

In a pulsating contest, the ​Foxes frontman had another sight of goal, while Sterling twice went close. However, it was former Leicester star Mahrez who got the next goal of the game, his hopeful drive from range deflecting in off Caglar Soyuncu.

The Algerian had been running rings around Ben Chilwell, and was instrumental in City’s second of the evening, releasing Raheem Sterling with a fine pass. The Englishman coaxed a foul out of Ricardo Pereira, with Ilkay Gundogan duly converting the resultant spot kick to complete the turnaround. 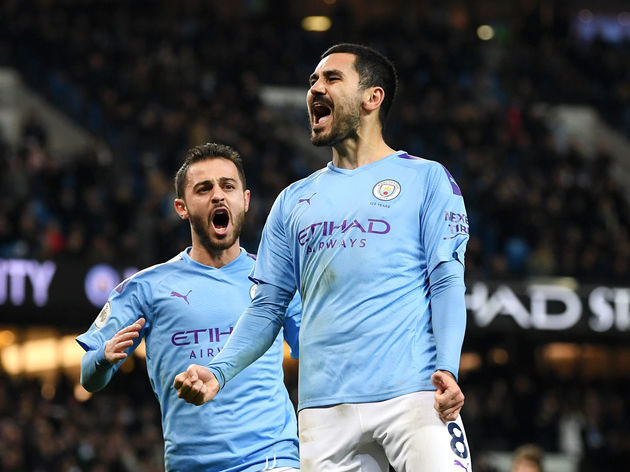 Vardy turned provider soon after the restart, sending an inch-perfect cross to Harvey Barnes. Steaming in at the back post, the wideman couldn’t get the desired contact, watching on as the ball skidded wide of the target.

City swiftly punished that error from the youngster, with De Bruyne’s low ball finding an unmarked Gabriel Jesus, who slotted into an empty net to give the home side a two-goal advantage they would never relinquish.

This was the kind of performance Manchester City fans have been crying out for. The champions have been lethargic for large periods this term, rarely looking like a team that had earned a combined 198 points over the previous two campaigns. As brilliant as he has been this decade, David Silva’s powers are fading, and the side appeared to be more mobile without the Spaniard in it.

This may be the lineup Pep Guardiola should stick with in the future, given how they tore the Foxes to shreds at times. It’s just a shame he stumbled across it after ​Liverpool had built an insurmountable lead.

De Bruyne was superb in City’s midfield, dominating throughout the contest. However, it was the performance of Mahrez that truly caught the eye, the £60m man showing why the Mancunians were so desperate to take him away from the Midlands. 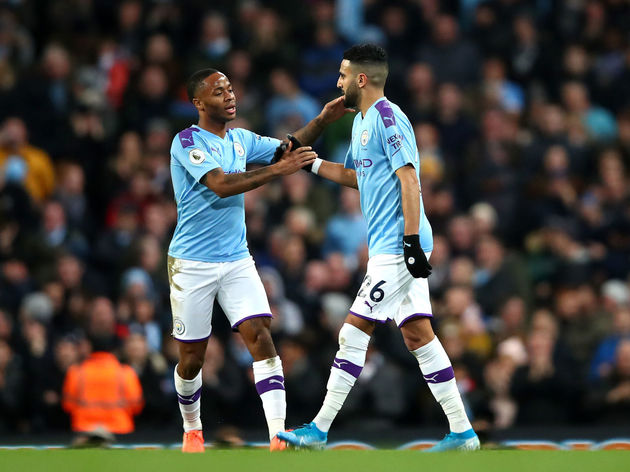 There were moments of sublime skill as he dazzled the home crowd, as well as Foxes full-back Chilwell – the England international having a torrid time trying to contain Mahrez, whose Sky Blues career has well and truly taken off.

His goal was just the icing on the cake.

Your weekly reminder that Kevin De Bruyne is very good at football. His cross, Jesus scores

Riyad Mahrez’s first half by numbers vs. Leicester:

Leicester’s title tilt is over just as quickly as it had begun. Less than a fortnight ago, people started talking them up as Liverpool’s main challengers. Now? Nah. They were certainly in the contest at the Etihad Stadium, but their opponents were well worth the victory. Would Leicester still be firing on all cylinders if they hadn’t been hyped up by supporters?

The Citizens may have dictated the play, but they looked vulnerable whenever Vardy got an opportunity to run at them. He’s effectively retired from international football, but Gareth Southgate would be well advised to bring him back after yet another standout showing from the striker.

Vardy has an incredible turn of pace and razor-sharp finishing skills, as he demonstrated on Saturday. The veteran is a fearsome forward, the kind any side in world football would benefit from having.

The Sky Blues travel to Molineux on Friday for a meeting with ​Wolves, before playing host to ​Sheffield United the following Sunday.

Leicester have another heavyweight clash on the horizon as they welcome ​Liverpool to the King Power Stadium on Boxing Day. Two days after that encounter, the Foxes take on ​West Ham at the London Stadium.