​Manchester United picked up back-to-back wins in the Premier League for the first time this year, after goals from Bruno Fernandes, Anthony Martial and Mason Greenwood secured a 3-0 win against Watford.

United were given the chance to take the lead when Fernandes was brought down inside the penalty area just before half time, with the Portugal international stepping up to score his first goal since moving to Old Trafford.

Troy Deeney appeared to level the scoreline just a few minutes after half time, but the Video Assistant Referee ruled the goal out after a handball in the build-up to the goal – a harsh but ultimately correct decision. Things went from bad to worse for Watford when Martial doubled Manchester United’s lead with an audacious chip past Ben Foster, while Mason Greenwood fired a third into the back of the net via the underside of the bar.

Things should be sorted in the attacking third of the pitch following the arrival of Bruno Fernandes in January, but United have to take a long, hard look at their defence and midfield if they want any chance of finding their former glory.

It didn’t matter if United were defending or building attacks from the back, Ole Gunnar Solskjaer’s side didn’t look like a unit – with their defensive midfielders sometimes pressing, while the two centre-backs would drop deeper. 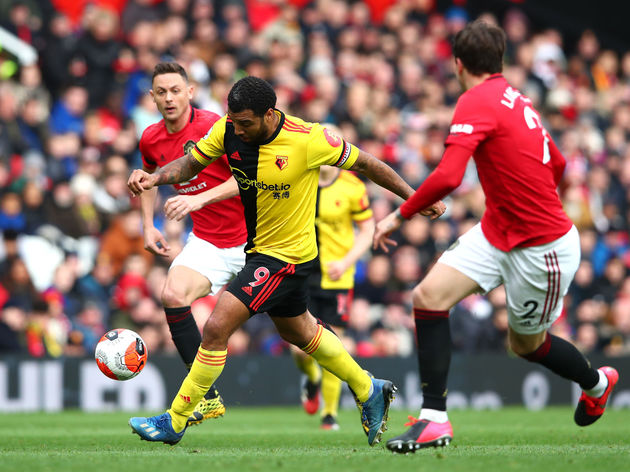 Individual mistakes on the ball didn’t help things either as Watford were pressing on the front foot, and although Fernandes (as well as VAR) helped to give United a vital win, there are still a lot of questions that need to be answered.

There’s not too much to shout about if you’re a Manchester United fan right now, but Bruno Fernandes is certainly one thing to crow about.

Bruno Fernandes has been our most progressive player in the first half. He has dropped deeper, drifted wider, directed others to move forward, attempted through balls and dribbled progressively.

Now, he is rewarded with a well deserved goal!

We’ve got a really good footballer in Bruno Fernandes, I pray and hope we surround him with quality footballers and a better coach.

He’s still getting used to things since his big-money move from Sporting CP, but the Portugal international is already starting to control games for Manchester United, dropping deep or out wide to get things going.

Fernandes also won and scored a late first-half penalty to put Manchester United into the lead, but it was the 25-year-old’s performance throughout the match which was the driving force behind Sunday’s win.

There’s a lot of positives to take for Watford despite the result and Abdoulaye Doucouré’s role under Nigel Pearson has really helped to transform them this season.

Playing as an attacking midfielder, Doucouré was vital for the visitors as they pressed Manchester United’s defenders whenever they were in possession, forcing them into silly mistakes and creating chances as a result. Two pieces from brilliance from Fernandes and Martial put the game beyond doubt, but Watford put in another good account of themselves, although without a win in their last five games, they desperately need to start getting points on board.

Points need to start getting on the board of Watford want to avoid relegation this season, but Nigel Pearson’s side should keep their head above water if Abdoulaye Doucouré keeps up his run of form as an attacking midfielder.

We look inferior. Watford have come with the perfect set-up. Abdoulaye Doucouré has been excellent. #MUNWAT.

As well as bringing threat in attack, Doucouré’s ability to help Watford defend from the front saw them cause United all sorts of problems throughout the game at Old Trafford.

Manchester United will host Club Brugge in the second leg of their Europa League knockout stage tie in midweek before travelling to Everton next weekend.

For Watford, it’s Premier League champions-elect Liverpool who are next up at Vicarage Road.