Liverpool won their first ever Club World Cup as they beat Brazilian outfit Flamengo in Doha, Qatar thanks to Roberto Firmino’s winner in extra time.

The Reds had a goal disallowed for offside when Mohamed Salah slotted in, while Jordan Henderson forced a great save from Diego Alves with a well-struck curler from distance.

Drama ensued towards the end of regulation time when Sadio Mane was brought down by Rafinha as the Senegal international charged through on goal, only for a VAR intervention to lead referee Abdulrahman Al Jassim to overturn his original decision. It was all a bit bonkers, really. Liverpool eventually broke the deadlock in extra time as Flamengo tired when Mane broke free and set up Firmino, who sidestepped a few challenges before smashing into an empty net.

Thankfully for the Reds, Virgil van Dijk was fit enough to start from the outset. That’s not to slag off Jordan Henderson, who filled in during the semi final, but the midfielder isn’t the best defender in the world. Virgil van Dijk is. Good to get that cleared up. A first half in which ​Liverpool looked bright in spells – with Naby Keita and Trent Alexander-Arnold both going close early on – was mainly dominated by Flamengo and their s***house tactics.

Whether it was Rafinha getting a reaction out of Mane or referee Al Jassim awarding the Brazilian side a free kick at every possible opportunity, Flamengo had a strange edge over the ​Champions League holders.

The game opened up as time wore on with neither side able to make the breakthrough, with Alisson making a number of saves while Flamengo counterpart Diego Alves was only needed towards the end of normal time.

The VAR incident? Still can’t make heads or tails of it. Why wasn’t it, at the very least, a free kick to Liverpool? Rafinha and Flamengo just got away with it? What? Why? Huh? WHAT?!?! Thankfully for Liverpool, that whole weird sequence of events mattered little when they struck in extra time, Firmino showing great composure to dodge a few tackles and hit home, taking his shirt off in vintage old Roberto Firmino style.

What will be disappointing for Liverpool is the injury suffered by Alex Oxlade-Chamberlain. The midfielder looked to be in a fair amount of pain holding his ankle, but managed to leave field on his feet.

STAR PLAYER – Yeah, let’s go with Bobby. He scored the historic goal and could have had another, had he converted instead of hitting the woodwork in the 46th minute.

Plus, every Liverpool fan on Twitter understandably was thanking the Brazilian for providing the one moment of attacking quality to separate the two teams on Saturday night.

Rafinha has fouled Mane all game and got away with it. Firmino’s just left him on the ground in his own net with his goal, there.

Roberto Firmino! Brilliant from Jordan Henderson, superb from Sadio Mane and lethal from the Brazilian.

What a ball from Henderson to pick out the run of Mane, who unselfishly squares for Firmino to finally break the deadlock. #LFC 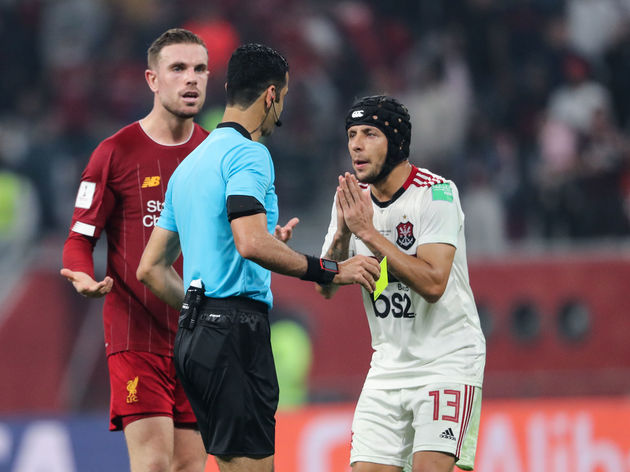 There’ll be little rest for Liverpool, with Jurgen Klopp’s side set for a tough trip to Premier League title challengers (kinda) Leicester on Boxing Day. They then entertain Wolves and Sheffield United before taking on Everton in the FA Cup.

That’s Flamengo done for the year. They may not have won on Saturday night, but it’s still been a very successful year for Jorge Jesus’ side, winning a second Copa Libertadores, a sixth Campeonato Brasileiro Série A, and a record 35th Campeonato Carioca.