​Lionel Messi and Cristiano Ronaldo. Two of the greediest footballers to have ever lived.

Who else starves the other 100,000 footballers with their chance to earn a coveted Ballon d’Or quite as much? Answer: nobody.

Well, since we’re living in times where our imaginations are running wild, why don’t we play out a scenario in which you’re only allowed to win the award once in the last 20 years? Sounds pretty interesting, doesn’t it?

Does sound like a plan to me, anyway. So who else could have scooped the gong during the last two decades? A few worthy contenders, that’s who.

How it’s done: It’s working on the basis that the winner of the award is next down in terms of votes that year.

This one requires no alterations, simply because Luis Figo was the best player in Europe back in 2000. It wasn’t quite cut and dry, though, as Zinedine Zidane ran him a very close second with an (almost) equally immense year.

He was in spectacular form for club and country, controversially making the move from ​Barcelona to ​Real Madrid in the summer of 2000. 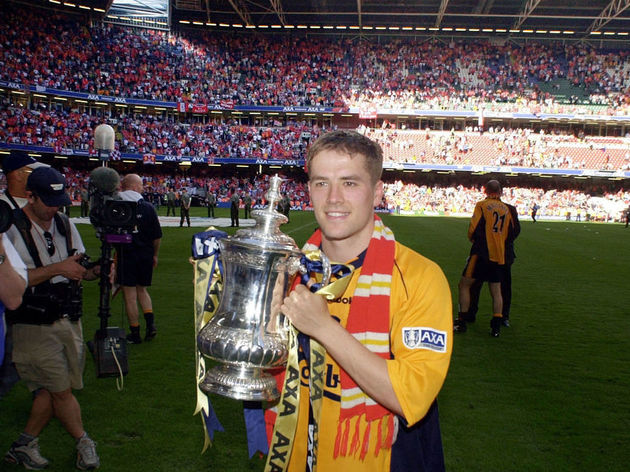 The only Englishman to win the award this century needn’t worry, his prize remains firmly in tact. Scoring a shedload of goals for ​Liverpool during that year, as well as six for England, Michael Owen saw off competition from Raúl and Oliver Kahn to win by a 36-point margin.

He also scored a famous late double against Arsenal in the FA Cup final that year, along with winning the UEFA Cup, UEFA Super Cup and Carabao Cup. A decent haul. The OG Ronaldo was unplayable during the vast majority of his career, but a certain French publication deemed his 2002 debut campaign with Madrid to be worthy of their ultimate prize.

He scored 30 club goals during the 2002/03 season – he would score more the following term – but most importantly, he grabbed 11 goals for Brazil that year including both in the 2002 World Cup final to land the Seleção their fifth crown, making them the most successful nation in the competition’s history. Still yet to venture into hypothetical territory, we move onto Pavel Nedvěd. It can never be understated just how outstanding he was, but his career reached peak magnificence in 2003, where he was simply unplayable for ​Juventus.

The Old Lady won the ​Serie A and Suppercoppa Italiana double at the end of the 2002/03 season, while Nedvěd also helped guide his side to the ​Champions League final, and his form maintained its excellence for the remainder of the year. Czech Republic’s finest ever footballer. One of the finest strikers of the generation tore Serie A to shreds week after week during his time with ​AC Milan, enough so that France Football took note in 2004.

In 2004 he claimed a league and cup double with the side, and having finished in third place during the 1999 and 2000 Ballon d’Or awards, he finally got his hands on the prize. When he wasn’t getting arrested for carrying a fake passport or out winning piglets, Ronaldinho was a master of the game. With Barcelona that year, he secured a Supercopa de España and ​La Liga double as well as the FIFA Confederations Cup with Brazil.

But who cares about trophies and goals, Ronaldinho brought joy to people’s faces with his approach to the sport, boasting more tricks than peak David Copperfield. He was a pleasure to watch in his prime and a worthy winner ahead of Frank Lampard and Steven Gerrard that season. Facing the prospect of going head-to-head with his international teammate Gianluigi Buffon for the 2006 Ballon d’Or, the truth is, it was only ever going to be the central defender who’d win.

He’d been in immense form for Madrid, but it was his captain’s showing throughout Italy’s World Cup-winning campaign that truly set him apart – conceding just two goals (barring penalties) throughout the whole tournament. Securing the 2007 Champions League for Milan with victory over Liverpool did no harm to Kaká’s chances of winning the 2007 Ballon d’Or but, truth be told, even if he’d have lost that final it would have made no difference.

One the best foreign players ever to grace Serie A, the Brazilian’s impeccable footwork and eye for goal from midfield made him a shoo-in to win the prize at some point. Here he is, earning trophy number one of his stupidly impressive five-time haul. But oh, wait, this is a different list! So, if you haven’t worked it out yet, ​Ronaldo’s one (and only) Ballon d’Or win came in 2008.

Probably had something to do with winning the Champions League, scoring an utterly ridiculous number of goals for ​Manchester United and a bunch of other domestic silverware. Just probably. The start of a long and beautiful relationship with the award for ​Messi came in 2009, where his otherworldly scoring rates and downright majesty earned him the first of what would become six Ballon d’Or wins.

Everything he touched that year (along with pretty much everything before and after) saw him blow the nearest competition Ronaldo and Xavi out of the water. He thoroughly deserved it, too. This is where it gets interesting. With Messi now no longer allowed to be included in the vote, the second-place winner in 2010 was Andrés Iniesta. He scored the winning goal in the 2010 World Cup final and won a domestic double. So, not a bad year himself.

A player of his calibre was worthy of winning the Ballon d’Or at some point, and with Messi now out of the picture, he would have got his just rewards for an outstanding individual year. Moving on to the other half of that untouchable Barcelona midfield, Xavi finished third in the 2011 shortlist (behind the obvious choices) with 9.23% of the overall final votes.

Just like his club and international teammate, Xavi was one of the finest to grace the game with an elegance on the ball that was a sight to behold. Barcelona won the Champions League, La Liga and Supercopa de España that season, largely in part to their midfield magician. Now we’re entering uncharted territory, where all of the top four during the 2012 voting has already won the award. That takes us down to fifth where Radamel Falcao hit astronomical scoring rates while with ​Atletico Madrid.

His goals played their part in Europe too, where Los Rojiblancos claimed a Europa League success with victory over Athletic Bilbao in the final, in which the Colombian striker scored his side’s first two goals in a 3-0 win. During a closely fought battle for the 2013 award, ​Bayern Munich’s Franck Ribery was within a whisker of beating Ronaldo and Messi to the gong, in an award many feel ​he deserved to win anyway.

A trophy-laden year saw the Frenchman lift five pieces of silverware – including the Champions League – in a season many consider the finest in his career. He won countless Player of the Season awards, except for France Football’s. Well, in this world, he finally gets that privilege. Tasked with usurping Ronaldo and/or Messi from their respective thrones this year was goalkeeper Manuel Neuer. Widely regarded as the finest in the world at the time, his expertise was called upon by Germany as he helped guide them to World Cup success in Brazil.

He also did the usual domestic trophy haul, saved a billion shots, and rushed off his line with lightning pace a million times more. The Brazilian’s joint-highest standing on the shortlist came during a season in which world football’s most feared forward lines was at its unstoppable best. 2014/15 remains his highest-scoring season to date, and the following one wasn’t too shabby neither.

Together with Messi and ​Luis Suarez they romped to La Liga, Copa del Rey and Champions League success in 2015, although, as expected, it would be Messi who would actually win the Ballon d’Or. Can you imagine Antoine Griezmann’s ego if he’d genuinely have won the award that year? I can’t, but based on the rules for this list, in 2016, he did.

There’s no doubting his supreme talents, playing an integral role in guiding France to the Euro 2016 final, while also notching goals for fun in the red and white of Atletico. Ronaldo’s involvement in that tournament helped him claim first place, with Messi taking the second slot that year. Working our way down to fourth on the list is the greatest goalkeeper of all-time – ​fact.

While goalkeepers never quite get the recognition in awards such as these that they deserve, there is no understating how utterly superb ​Buffon has been throughout his career, with 2017 being a year no different to the rest.

Only this time, he would actually have been given the recognition he deserved – at least as far as France Football is concerned – by taking the place of Neymar, Messi and Ronaldo above him. The guy to finally buck the trend after 11 years of repetitiveness was a man fully deserved of it, which made the victory significantly sweeter. Sustained excellence for both club and country meant not even Messi or Ronaldo could surpass the Croatian.

​Modrić did it week after week, match after match and minute after minute. That work ethic and supreme talent translated into both the national team and Madrid, which is why it’s no wonder both did alright with him in the middle of the park. Liverpool fans rejoice! Losing out by such a tiny margin to the Argentine with his second-place finish last year was the Reds’ Dutch mountain.

Every man and his dog has waxed lyrical about how Van Dijk has revolutionised the Liverpool defence and made them the unstoppable machine they are today, so, for that reason, I won’t delve too much further.

​Instead, let’s work on the basis that he’s the first defender to claim the award since 2006 – and the first to even make the top five since then – in a year that brought with it Liverpool’s sixth Champions League title.