​Everton have endured a challenging decade which has produced moments of both ecstasy and anguish.

The club have not won a trophy, nor have they reached a final. Two trips to Wembley for FA Cup semi finals were the only domestic achievements that the Toffees could shout about. Everton have also dabbled in Europe twice, making appearances in 2014/15, where they were halted in the round of 16, and in 2017/18, where they were humiliated by Atalanta and Lyon and finished third in their group.

Towards the back end of the decade, the club have struggled to retain their identity as the ‘best of the rest’. However, new manager Carlo Ancelotti will be looking to restore Everton’s successes over the next ten years.

Taking all of that into account, here’s a look at an Everton team of the decade… Tim Howard (GK) – Howard had already been Everton’s number one since 2006, arriving from Manchester United for £4m. The American won Everton Player of the Year in 2014, but achieved no more accolades with the Toffees until his departure in 2016. Howard is most famous for the goal he scored against Bolton from his own box (but credit to the wind for that fine assist).

Seamus Coleman (RB) – Coleman gained the Toffees captaincy this decade but also suffered a horrific leg break, an injury which kept him out for over a year. The Irishman’s passion for the club is what has made him a cult hero and a regular starter since the decade began.

Sylvain Distin (CB) – The Frenchman enjoyed the best years of his career on Merseyside. Distin was a regular starter for the Toffees during the opening four years of the 2010s and played a vital role during his side’s successful 2013/14 campaign, when Everton qualified for the Europa League.

Phil Jagielka (CB) – Jagielka was an influential member of Everton’s side throughout the decade, forming a reliable partnership with Distin. He made a total of 385 appearances and his commitment to the club landed him the captaincy which he retained until his departure in 2019.

Leighton Baines (LB) – Baines has been an asset at Goodison Park throughout the decade, despite the arrival of Lucas Digne consigning the Englishman to the bench. Known for his set-pieces, Baines became a unique player who provided his side with a different dynamic throughout the decade. 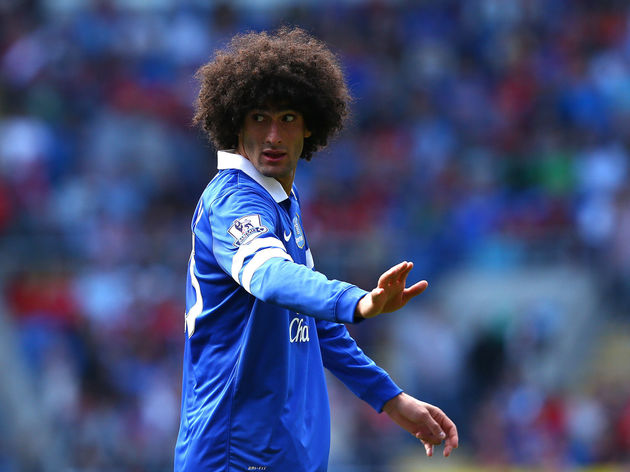 Marouane Fellaini​ (CM) – Despite following David Moyes to ​Manchester United in 2013, Fellaini is still regarded as one of Everton’s best midfielders of the decade. His powerful attacking prowess offered a different dimension, something the Toffees have missed since his departure.

Gareth Barry (CM) – Barry arrived on Merseyside in the twilight of his career, but became a fan-favourite due to his composed presence. He joined West Brom in 2017 after just four years at Goodison Park, but made 155 appearances and added a much-needed calming mentality to the side.

Idrissa Gueye (CM) – Gueye was a player that many ​Everton fans wanted to stay, but understandably moved to Paris Saint-Germain to pursue ​Champions League football. The Senegalese midfielder added energy and fight into his side’s midfield, and many had him down to captain the team in the future.

Ross Barkley (AM) – The Englishman displayed an incredible amount of potential when he burst onto the scene in 2013, but the creative and energetic midfielder faded as his stint at Goodison went on. However, Barkley made Everton tick when he was at his best, proving to be one of their best midfielders in a generation. ​Romelu Lukaku (ST) – The Belgian forward enjoyed a successful spell on Merseyside, netting 87 goals in 166 games. Lukaku delivered consistently for Everton between 2013 and 2017, sending them to the FA Cup semi-final with an iconic solo goal against ​Chelsea, but left for Manchester United as he chased European football.

Tim Cahill (ST) – Although Cahill flew across the Atlantic in 2012, he remains one of Everton’s best strikers of the decade. This is due to a lack of goalscoring talent since his departure, with Lukaku being the only candidate. Despite being past his prime, he made 77 appearances for Everton during the 2010s.