The Rams fired a warning shot at their visitors in the 10th minute with 18-year-old Louie Sibley rifling a shot from distance just past the post. ​

Derby continued to enjoy the best of the first half but a rare mistake allowed Odion Ighalo a sight at goal – but he could only fire his effort into Kelle Roos’ midriff. Minutes later, United would open the scoring in the strangest of circumstances. Latching onto a deflection, ​Luke Shaw fired a volley straight into the floor which – via a ​Jesse Lingard deflection – ended up looping into the Derby net. Ighalo doubled their lead soon after with a smart finish from inside the box.

After the break the game suffered from a drop off in intensity, but that did not stop Ighalo grabbing his second goal of the game in the 70th minute.

In the opening exchanges, a beautiful narrative about Rooney returning to face his former club was starting to form.

The 34-year-old reacquainted himself with the United faithful by steaming through Scott McTominay early on. The challenge attracted a rabid response from the the home fans and when Derby won a free kick in the 20th minute, football writers everywhere were hoping Rooney would curl it into the top corner. 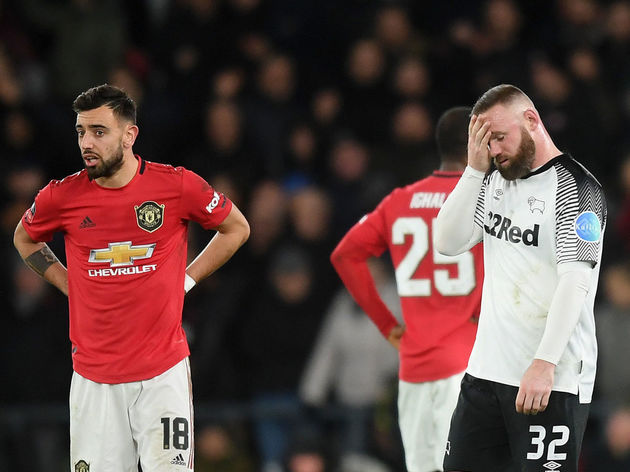 For a few moments it look like they would get their wish, only for Romero to get a hand to it in the nick of time.

After this enthralling start, Rooney’s night soon turned into a nightmare. United grabbed two quick-fire goals before half time, killing off the game in the process. In the second period, the former England man looked leggy in midfield and didn’t even feel the need to treat us to that many mesmerising cross-field balls.

Then, there was the chance for the fairytale ending. Standing over another free kick with his side trailing 3-0, Rooney whipped the ball wickedly over the wall and towards the top bin… only for Romero to deny him again.

So much was written about Rooney’s return coming into the game but – like so many things in life – his return to face United ended up lacking a Hollywood ending. Serves us all right for hyping it up, I suppose. ​If Odion Ighalo keeps putting in performances like these, then quite a few people who questioned his signing are going to have to eat their words.

The Nigerian impressed again this evening, bagging a brace, pressing well and linking up nicely with his teammates. ​Marcus Rashford must be worried about forcing his way back into the team when he’s fit. Ok… maybe not.​

Next up, ​Derby look to continue their fine Championship form when they take host Blackburn Rovers at Pride Park on Sunday.

​United on the other hand have the small matter of the Manchester derby to contend with. That game also takes place this Sunday.