England beat Colombia in a penalty shootout in the final World Cup Round of 16 encounters at the Spartak Stadium on Tuesday night to eliminate the South American side after the game finished 1-1 after extra time.

Harry Kane opened the scoring in the 57th minute and England seemed to have sealed progress in regulation time but Yerry Mina grabbed an equaliser in stoppage time to take the match into extra-time where nothing could separate the two sides.

In the ensuing penalty shootout, Jordan Henderson and Mateus Uribe missed one each to take it into sudden death where Jordan Pickford saved Carlos Bacca’s spot-kick before Eric Dier’s penalty sealed England’s progress to the quarter-final.

Here are the major talking points from the game.

With 2014 World Cup star James Rodriguez not recovering in time to be available for the England game, Colombia opted to go with a 4-3-2-1 formation with Wilmar Barrios, Jefferson Lerma, and Carlos Sanchez at the base of midfield.

This saw Juan Quintero and Juan Cuadrado just behind Radamel Falcao. But Colombia’s plan at the start of the game was to use this midfield trio to cover for the runs of their full-backs when they advanced.

Colombia’s midfield did not press England but their full-backs certainly did. The likes of Santiago Arias and Johan Mojica did try and put pressure on Ashley Young and Kieran Trippier on the flanks.

Arias was also tasked with getting forward on the right flank to target Young and Harry Maguire’s left side. This allowed Cuadrado to drift inside and get closer to Falcao, who seemed hell-bent on giving Kyle Walker a tough time.

However, Arias getting forward allowed England to get in behind them with Raheem Sterling finding space to get into while Harry Kane also peeled off when he could and it was only the defensive work of Yerry Mina that kept them at bay for the first quarter of the game.

The return of Dele Alli to England’s midfield was supposed to be good news for the Three Lions but it was anything but – especially in the first half. The Tottenham Hotspur midfielder was the least effective of the outfield players in a red shirt.

While Jesse Lingard and Raheem Sterling worked hard between the tight lines of Colombia’s defence, Alli was nowhere to be seen. Having only just returned from an injury that sidelined him in the group stages, he seemed well off the pace.

In attack, Alli was seen to be sitting too deep and a mere spectator while the rest worked hard to get forward. Even when he did get the ball, his passing accuracy was nothing to write home about.

In the first half alone, Alli completed zero dribbles, made zero tackles, and created no chances. England lacked creativity through the middle and Alli’s disappointing performance was the root cause for that.

With five minutes to go in the first half, Colombia were very lucky not to go down to 10 men. An off-the-ball incident sparked a melee in the box when England had won a free-kick and the prime instigator Wilmar Barrios was not sent off.

As the referee tried to ensure Colombia’s wall was behind the line, Jordan Henderson tried to park himself at the end of the wall. Colombia were still trying to adjust their wall when Barrios saw Henderson refusing to budge and immediately headbutted him in the chest and chin.

Although Henderson did make a meal of it, it saw tempers flare and the referee had to consult VAR as he had not seen the incident while setting up the wall. And when the decision was finally made, it was only a yellow card.

“A player who, when not challenging for the ball, deliberately strikes an opponent or any other person on the head or face with the hand or arm, is guilty of violent conduct unless the force used was negligible.” – Law 12 on Fouls and Misconduct

In such cases, violent conduct is a red card offence. Just a mere caution for Barrios was met with utter disbelief.

Although fans wondered why a penalty wasn’t given, it was because the ball was not in play. Had he headbutted him while the free-kick was being taken, that would have been a penalty.

With no goals coming from open play, England were gifted a chance to take the lead when Colombia conceded a penalty in the second half. Less than 10 minutes after the restart, Carlos Sanchez was responsible for conceding his second penalty at the World Cup.

The first group stage fixture had seen him sent off for a deliberate handball against Japan in only the third minute and he was duly sent off as 10-man Colombia fell to a 2-1 defeat. And tonight, his manhandling of Harry Kane saw England win a penalty.

It was just plain stupid of Sanchez who had even collided with the referee while trying to mark Kane. That collision saw the referee take his eyes off the ball and focus on Sanchez and Kane instead and the foul was as clear as day.

Kane stepped up and beat David Ospina (something he is familiar with in North London derbies in the Premier League) with a spot-kick that went straight down the middle to make it 1-0. 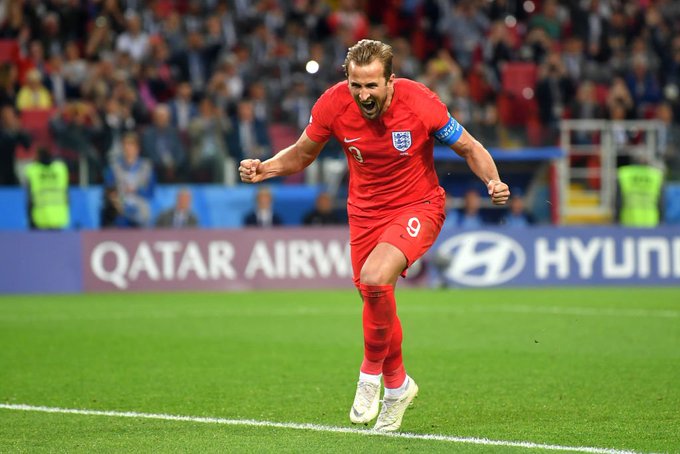 But apart from the penalty, England never really threatened to score after that – especially once Colombia had equalised. For a long time, Kane’s penalty in the 57th minute was England’s last shot on target while Colombia were busy fashioning chances at the other end.

By the end of the game, England had just two shots on target.

After going 1-0 down, Jose Pekerman made a change and withdrew Jefferson Lerma for Carlos Bacca. The intent was clear, the South American side were going to match England’s formation with a 3-5-2 formation of their own.

However, the antics and fouls continued to interrupt the game and it reached a point where football wasn’t the primary focus of the game. The Colombians had tried to kick up the turf near the penalty spot before Kane’s spot-kick and that did not work.

They then proceeded to foul the English players and it reached a point where even both strikers Bacca and Falcao were booked. It wasn’t until the 80th minute that they seemed to realise that they were 1-0 down and that they needed a goal.

England coach Gareth Southgate responded by taking off a poor Dele Alli for Eric Dier so the Three Lions would have security in midfield. They switched to a 3-4-1-2 formation with Dier and Henderson behind Lingard who played in a no.10 role.

It was enough to keep Colombia at bay for 90 minutes. But stoppage time saw Colombia score from a set-piece – Yerry Mina again, scoring his third goal of the tournament. It was the first time England had conceded in stoppage time in World Cup history.

However, it was not to be their day as England won 4-3 in the penalty shootout – the first time England have ever accomplished that feat at the World Cup.

Wenger: FIFA may reconsider three-team groups for the 2026 World Cup.

Wenger: FIFA may reconsider three-team groups for the 2026 World Cup.