Manchester United toiled to an uninspiring 1-1 draw at Club Brugge in the first leg of their Europa League last 32 tie on Thursday night.

Antony Martial capitalised on a mistake to snatch an away goal and level the scores after Dennis had deservedly put the home side in front. 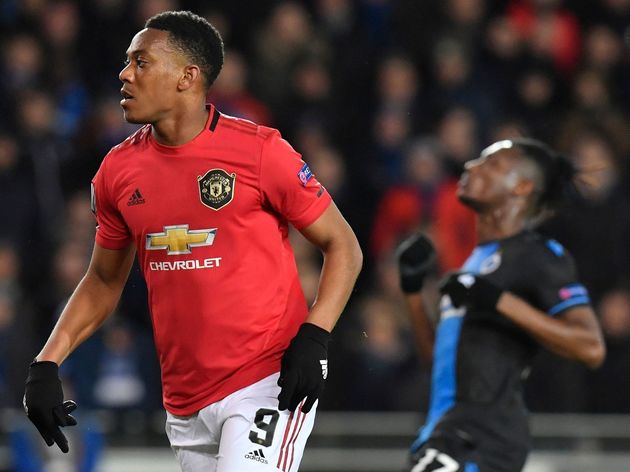 Brugge started brightly and it wasn’t long before they had the lead. A long punt from keeper Simon Mignolet led to Dennis lobbing the ball over the hapless Sergio Romero and into an empty net.

But then it was Brugge’s turn to be sloppy, Maxim De Cuyper threw the ball straight to Martial who raced from the halfway line and calmly slotted the ball beyond Mignolet.

The Frenchman almost struck his second before the interval, but his rasping shot from outside the area cannoned off the woodwork and away to safety.

In truth, the second half delivered very little in terms of goalmouth action. The introduction of Bruno Fernandes injected life into United but they were unable to find a winner and the teams head into the second leg all square.

Ole Gunnar Solskjaer’s multitude of changes were the talk before kick off, and those squad players handed their chance didn’t exactly cover themselves in glory.

It was clear for all to see that United simply do not have the numbers when it comes to quality in depth, their shortage of players is alarming and their squad is wafer thin.

#mufc had one touch in the Brugge area before Martial scored. Despite the respectable scoreline, the excessive changes and change in formation have not worked. Solskjaer owes Martial one for that half.

Pretty abject until the goal. That’s what happens when you take Fred, AWB, Rashford and McTominay out of this United side. Martial at least in clinical mood. #mufc

Without messers Fred and Bruno Fernandes, United looked flat, devoid of any spark or creativity.

Lingard and Pereira offered very little going forward, with a lack of guile and invention making it easy for Brugge to mark the pair out of the game.

The visitors enjoyed large spells of possession but it was all too slow and pedantic, there was no injection of urgency and Brugge were able to pick United off easily.

United were severely lacking in attacking options, only showing a threat when pouncing on the home side’s mistakes.

Then with the introduction of Fernandes and Fred, the game suddenly kicked up a notch, but it was too little too late and Solskjaer’s master plan to rotate simply hadn’t worked.

Very often the scapegoat but very much United’s saviour here. He was Ole’s get-out-of-jail card in a turgid affair as he showed a real coolness to bag a crucial away goal. Restricted to very little up top, he made the best of it and pounced on a defensive lapse of concentration to nick his side an equaliser in the first half.

Brilliantly taken goal by Martial, great to see him stepping up with crucial games in Rash’s absence. We have barely created anything so I’m incredibly grateful to have the away goal. Been a much better last 10-15 minutes though. #mufc

Yes it was an individual mistake but a striker still has to make something of it and find the back of the net. Clinical from Martial. #MUFC

Capitalising on the mistake, he showed lightning speed and strength to shrug off the attentions of a defender before finishing with real composure.

The Frenchman was unfortunate not to have a second before half-time when he saw his long-range shot come crashing back off the post.

In the second period, he was the man looking to make things happen for Solskjaer’s men, but a few promising bursts came to nothing.

Perhaps surprisingly he was substituted early by Solskjaer, seeing as he was the one creative spark, but then again given his lack of service Martial was most likely relieved to see his number go up.

As for Ole’s troops, they welcome relegation-threatened Watford to Old Trafford in the Premier League on Sunday.