The Bundesliga is a league known for goals, goals and more goals – and the weekend so far has proven to be no exception, with 21 goals piled in during the six games played so far.

​Erling Haaland scored his 40th goal of the season as Borussia Dortmund picked up a 2-0 Bundesliga win against Werder Bremen, while RB Leipzig kept up their title charge with a breathless 5-0 demolition of Schalke.

But it was Bayern Munich who kicked off the weekend’s goal fest in, uncharacteristically, nervy style as they edged out struggling Paderborn 3-2 at the Allianz Arena.

Serge Gnabry and Robert Lewandowski had goals cancelled out by Paderborn, but Bayern’s Polish striker scored with just a few minutes left on the clock to ensure the Rekordmeister would finish matchday 23 at the top of the table. 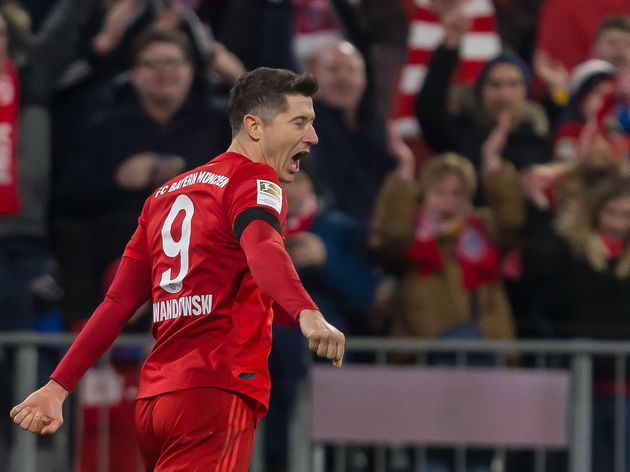 Serge Gnabry and Robert Lewandowski saw their strikes cancelled out by the visitors, but Bayern’s Polish striker scored with just a few minutes left on the clock to ensure the Rekordmeister would finish matchday 23 at the top of the table.

That win was followed by success for Borussia Dortmund, as BVB were able to maintain the four-point gap to Bayern with a win away at Werder Bremen – returning to the Weserstadion just two weeks after they were knocked out of the DFB-Pokal.

Dan-Axel Zagadou opened the scoring just after half time to register his fourth goals for the club – three of which have been assisted by Jadon Sancho – while Haaland secured the points with a brilliant finish soon after.

It was the Norway international’s 40th club goal across all competitions this season, where on average Haaland is finding the back of the net every 49.825 minutes.

Elsewhere, Borussia Mönchengladbach were held at home by TSG Hoffenheim thanks to a last-minute goal by centre-back Lucas Ribeiro, who was making his Bundesliga debut for Alfred Schreuder’s side.

Fortuna Düsseldorf (2-0 vs Freiburg) and FC Köln (5-0 vs Hertha BSC) picked up vital wins away from home as they continue to battle against relegation, with the former now just two points away from safety.

In the Bundesliga’s Topspiel, RB Leipzig registered a crushing 5-0 win away at Schalke to stay just one point off the top of the table. Marcel Sabitzer opened the scoring for Julian Nagelsmann’s side inside the opening minute, although Schalke were able to hold on throughout the rest of the first half without conceding another goal.

But David Wagner’s side imploded after the restart. Christopher Nkunku was the star of the show for Leipzig as he picked up four second-half assists, setting up Timo Werner, Marcel Halstenberg, Angeliño and Emil Forsberg.

Here’s the weekend’s results so far…

On Sunday, Mainz will look to move clear of the relegation zone when they travel to face VfL Wolfsburg, with Achim Beierlorzer’s side looking to extend their mini unbeaten run to three games.

Later in the day, Eintracht Frankfurt can move into the top half of the table when they welcome Union Berlin to the Commerzbank-Arena.