Leicester City manager Brendan Rodgers has explained his decision to withdraw striker Kelechi Iheanacho in the first half was nothing more than a tactical change, after his side played out a 1-1 draw with Norwich.

​The Foxes suffered a blow to their title credentials as their eight-match winning run came to an end on Saturday, only managing to take a point from the relegation strugglers on home turf.

Teemu Pukki’s early strike had the Canaries flying, but although it took only 12 minutes for a heavily deflected Jamie Vardy strike to level things up, Iheanacho found himself taking a seat on the bench seconds later, in favour of Demarai Gray.

Having been frozen out of the team for 13 league games before his dramatic recent return to action, many took the striker’s first-half substitution as a sign that Rodgers doesn’t yet fully trust him.

But the manager says this is not the case.

​“It was one where we wanted to go to 4-3-3 and when we moved him out to the side,” said Rodgers, via ​Leicester Mercury. “He’s not a natural winger, he’s not one who can play outside.

“So I can either leave it and wait until half-time or make the change when I did. And then make the other change on half-time [Harvey Barnes on for Dennis Praet]. It was purely a tactical one.

“He was fine. He was disappointed because he’s been terrific for us in the past few games. He understands, he knows it was nothing personal, just the flow of the game needed to change.

“It was probably the right result. We didn’t start so well in our pressing and then our passing was slow. In fairness to Norwich, they played well in that opening period. 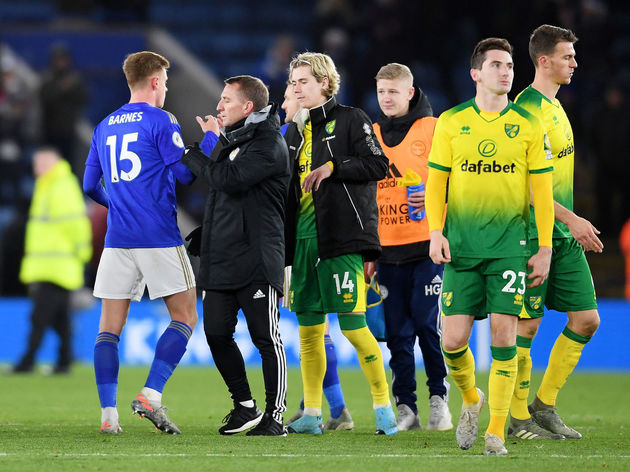 “I felt we needed to change it. We started with the same shape as last week but it wasn’t quite working for us. We made the change and the last 15 minutes of the first half was better when we went to 4-3-3.”
​

Leicester ultimately had to settle for a point, however, and now sit ten points adrift of leaders Liverpool, who ​beat Watford 2-0 earlier in the day.