Borussia Dortmund are reported to have made a surprise approach for Borussia Monchengladbach forward Marcus Thuram, as the 22-year-old continues to impress in his maiden Bundesliga season.

An impressive campaign for EA Guingamp earned Thuram – son of former Juventus and Barcelona defender Lilian – a move to Gladbach in the summer, where he has since shone brightly under Marco Rose. 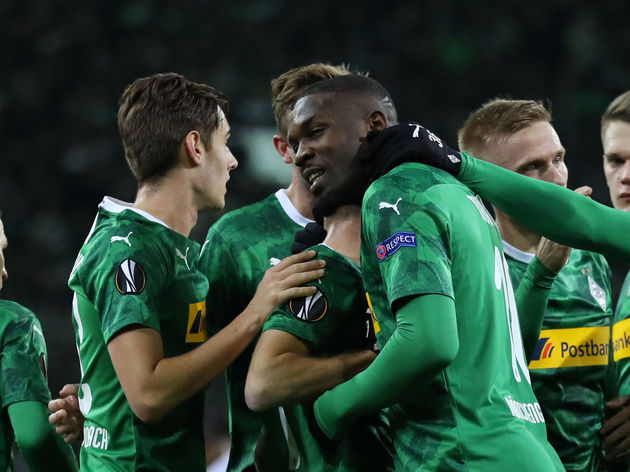 Ten goals and six assists in 25 appearances so far have helped transform his new side into genuine title contenders, and they currently sit two points behind leaders RB Leipzig, two ahead of Bayern Munich, and five ahead of Dortmund.

With Dortmund’s managerial situation as unstable as it is at present – Lucien Favre’s future teetering on the edge after ​defeat to Hoffenheim – you would be forgiven for raising an eyebrow at their prospects of landing one of the division’s in-form forwards from a title rival fast running away from them.

And yet that is what we have reports of on the continent. Reliable French outlet ​GFFN report, sourcing Foot Mercato, that Dortmund have ‘made initial contact’ with Gladbach over the forward, who arrived in Germany for €9m just six months ago.

The report states that Favre is at the centre of the interest, which only casts further doubt over its realism given it seems increasingly unlikely he will survive the season in the job, and he is ‘feeling the ground’ to see if the player is at all interested in a move. It’s a brief report which doesn’t detail when Dortmund hope to land him, but if there is anything in the interest then it seems highly likely it would be ahead of a summer switch.

A January ​transfer would require Gladbach, financially secure and knee-deep in an unlikely title challenge, to risk upsetting the balance of their squad mid-season while simultaneously strengthening a title rival.

That would require some extraordinary circumstances, and while a summer move doesn’t exactly seem likely in itself, it is a good deal more feasible.