Borussia Dortmund produced a scintillating attacking display to dispatch Fortuna 5-0 in the Bundesliga on Saturday afternoon, keeping up the pressure on Borussia Monchengladbach at the top of the table.

Dortmund were brilliant for the entirety of the first half, playing some scintillating football and creating ​multiple chances. Marco Reus and especially Julian Brandt were involved in everything good for Die Borussen, with Zack Steffen the man preventing them from taking the lead.

As the first half was drawing to a close, Dortmund finally grabbed the goal they fully deserved thanks to Reus. The captain received a lovely pass from Lukasz Piszczek in the box, and he slotted home emphatically to give them a crucial goal on the cusp of half-time. 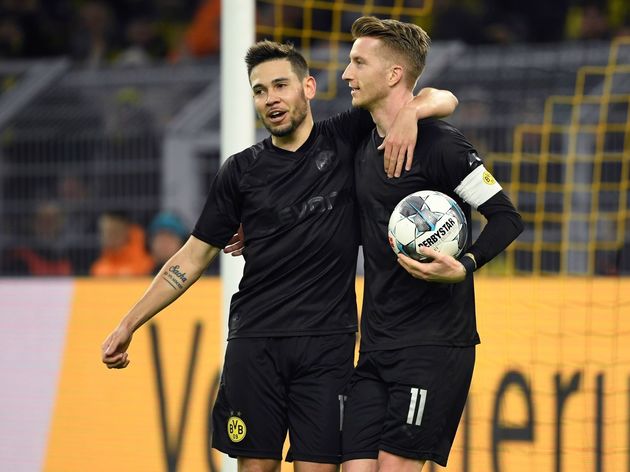 Dortmund came out the traps in the second half in similar fashion, and after Jadon Sancho had a goal ruled out for offside, Thorgan Hazard doubled the hosts advantage.

It was soon three with Sancho scoring this time, after the England international passed the ball into a gaping net following a neat exchange with Reus. The German himself made it four with 20 minutes to go, as he put it through the keeper’s legs after some good play from Hazard.

The demolition job was completed by Sancho after good work from Achraf Hakimi, rounding off a superb home performance.

Here’s 90min‘s review of the game.

Prior to last week’s cagey away win at Hertha Berlin, Dortmund have been in dire form. A number of poor results included a 4-0 thumping against fierce rivals Bayern Munich, and a poor home draw against Paderborn.

They had the chance to get back on track today with back-to-back wins and an improved performance against a team lying in 15th place. Dortmund did just that, with a dominating 5-0 win complemented by a superb performance. Lucien Favre will be encouraged by what he saw, and will hope his side can retain the momentum heading towards the turn of the year.

The star man award could easily have gone to one of ​Hazard, Sancho or Brandt – but Reus was simply immense up front.

He was at the heart of everything good for Dortmund and was a constant pest to Fortuna’s stretched backline. He must have covered every single blade of grass in the attacking third by the end of the 90 minutes, and played a key role in the majority of the home side’s goals.

Dortmund will now look to qualify for the knockout rounds of the Champions League, with victory against Slavia Praha needed to make that a possibility. They will have an eye on Inter’s clash with Barcelona, hoping the La Liga giants can do them a favour.

Fortuna, meanwhile, take on high-flying RB Leipzig next, in what’s sure to be another tricky Bundesliga encounter.