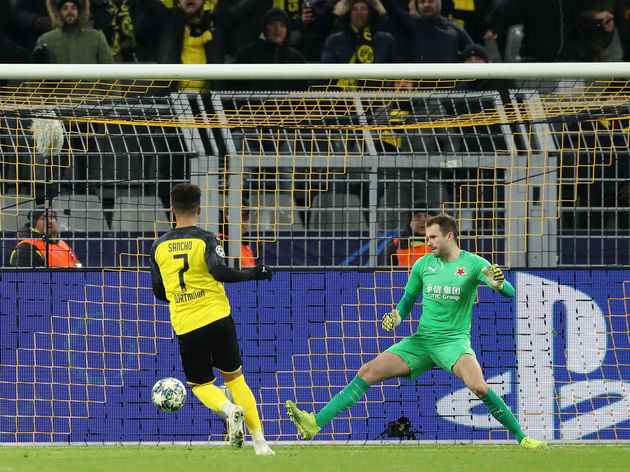 Falling behind failed to dampen Slavia’s spirits, and they continued to create before levelling on the brink of half time. A quick passing move caught the Dortmund back three out of shape and allowed Tomas Soucek to slot home Milan Skoda’s through ball.

An equaliser for their Group F rivals Inter at almost the exact same moment meant that Dortmund were facing a Champions League exit as the referee’s whistle blew to call a pause to proceedings.

Lucien Favre’s side were back in the driving seat on the hour, Sancho picking out Brandt’s run towards the near post to turn provider. The German midfielder smashed beyond Ondrej Kolar to make it 2-1 and the qualification pendulum swung back in Dortmund’s favour.

Slavia should have restored parity again, and wasted three glorious opportunities in the space of a minute. Mats Hummels cleared off the line and Burki made another fine stop, before Ondrej Kudela headed wide of an open goal. It was kamikaze defending as Dortmund nerves appeared to be shredded. Julian Weigl’s poor challenge on Tomas Soucek resulted in his second yellow card, leaving his already-panicked side with just ten men to hold onto their slim lead – but news of Barcelona’s late winner at San Siro sent a large roar around the stadium and saw the home side through to the knockout stages.

On a night where they had to better Inter’s point return, Dortmund needed to play on the front foot from the start. Lucien Favre obliged and once again deployed the 3-4-3 formation which put five past Fortuna Dusseldorf at the weekend. If it wasn’t for Marco Reus’ wastefulness in front of goal, it could have been 3-0 inside 25 minutes.

However, this approach (and wastefulness) left the back door open to Slavia – who have been a tough nut to crack in Group F and better than their pre-match tally of two points would suggest. Roman Burki denied the Czech champions twice before they equalised, and they found creating space and chances far easier than they should have.

Favre’s inability to react and commitment to a gung-ho style of play will certainly have worried ​Dortmund fans in the second half. With their hopes of a qualification hanging by a thread, Die Borussen continued to offer room behind their back three and space for Slavia to attack in the wide areas.

Burki’s heroics and Barcelona’s victory ensured their passage beyond the group stage, but Favre will have to rely on tactical improvement rather than luck if they are to progress further.

Still just 19 years old, Jadon Sancho was one of the coolest Dortmund players on a high-pressure evening and showed precisely none of the strain as he drove his side’s bid for qualification. With a goal and an assist in a game of the highest stakes, Sancho has truly put his recent off-field problems behind him.

The clock had barely ticked over to three minutes before Sancho made his first driving run at the Slavia defence, cutting onto his right foot and winning a corner. It only took a further seven for the winger to demonstrate his composure, calmly slotting home to put Dortmund ahead.

⚽️️ vs. Paderborn
⚽️ vs. Barcelona
⚽️ vs. Hertha
⚽️⚽️️ vs. Fortuna
⚽️️ vs. Slavia Praha

If it wasn’t for Marco Reus’ lacklustre finishing, Sancho would have claimed an assist long before he set Brandt away with a perfectly timed and weighted ball. It was his excellent movement and change of pace that gave him the time and space to pick out his colleague as Dortmund took the lead.

To say the game opened up in the final 20 minutes would be a monumental understatement, but it gave Sancho a chance to demonstrate both his pace and trickery as he tried to latch onto a number of balls over the top.

Czech league leaders Slavia will be hopeful of extending their 14 point lead when seventh-placed SK Dynamo visit the Sinobo Stadium on Sunday.