​Bayern Munich made it six wins from six in Group B on Wednesday night, as they beat Tottenham 3-1 at the Allianz Arena.

Bayern started on the front foot and took just 14 minutes to break the deadlock, thanks to Kingsley Coman. Serge Gnabry weaved through the Tottenham defence and found Coman in acres of space, coolly slotting home for the hosts.

Tottenham weren’t behind for long, and they found their equaliser through Ryan Sessegnon. The ball fell nicely for the English youngster, who took a touch before smashing it past Manuel Neuer to draw level with a momentous goal on his first start for Spurs.

The game was end-to-end, and with under a minute before the break Bayern restored their advantage. Alphonso Davies’ effort slammed off the near post into the path of substitute Thomas Muller, who was in the right place at the right time to pass it into the net.

Bayern seemingly put the game beyond the visitors just after the hour mark, as Philippe Coutinho finally got his goal. The Brazilian was given time and space to come onto his right foot, shape his shot up and guide it into the bottom corner to wrap up the win for Die Roten. ​Bayern came into the Group B finale with nothing to truthfully play for, having already secured top spot. Nevertheless Die Roten were hungry for the win, threatening their visitors’ goal from kick-off and rewarded for their energetic start with the slick opening goal through Coman.

The Frenchman’s injury didn’t slow FCB’s pace down and their free-flowing attacking football continuing through goals from Muller and Coutinho. They were superb in attack but a solid defensive performance was just as pivotal, as they stayed tight and organised at the back throughout to seal the win.

It was a perfect evening for Hans-Dieter Flick’s side, who conclude Group B with six wins from six and another emphatic display to round it off. Bayern have been outstanding in the group stages and are certainly one of the competition’s favourites, sending another statement across the continent.

STAR MAN – Philippe Coutinho produced a dazzling display on Wednesday night, and was unlucky not to get more than one goal. His quick thinking and excellent passing saw him at the heart of every Bayern attack, and his sole strike summed up his flair and quality in a brilliant display.

Manuel Neuer also deserves praise for his movement of the ball out from the back, while Serge Gnabry was once again lively. However it is the Brazilian who will take all the headlines with a typical playmaker’s performance, in an excellent game worthy of the ​Champions League. 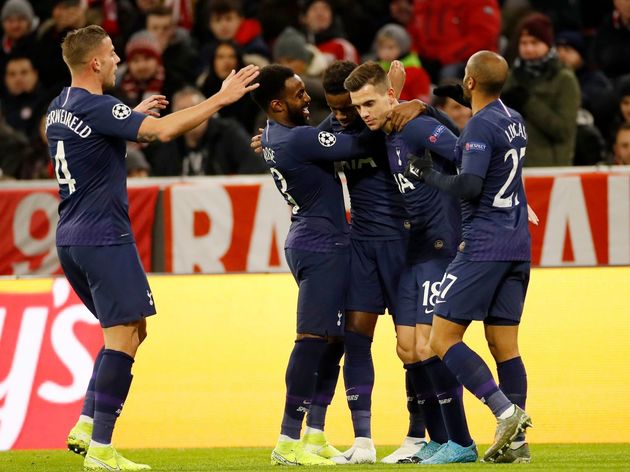 ​Tottenham deliberately travelled to Munich without a number of key players, resting a few with qualification already assured. They struggled to keep up with Bayern right from the start, cut open far too easily and conceding easily preventable goals inside the opening 45 minutes.

Sessegnon’s goal showed their attacking prowess, and while that was maintained throughout the game their defending was worrying. Spurs gave too much time and space to Bayern’s attackers, and they were punished for it time after time as they made it 10 total goals conceded to FCB over the two games.

Jose Mourinho’s side qualify behind Bayern as expected, but their strength in attack and weakness in defence has, and will, cost them. Tottenham know they can compete with the best of the best, but tonight showed that defensive vulnerabilities will continue to cost a talented team.

STAR MAN – Tottenham have Ryan Sessegnon to thank for their quality in attack, with the English youngster a fresh spark among a group of tired players. He deservedly got his first goal for the Londoners and was lively all night long, showing encouraging promise for the near future. Bayern are back at the Allianz Arena in three days, when they host Werder Bremen on Saturday. Die Roten continue their ​Bundesliga campaign on 18 February, travelling to high flying Freiburg who currently sit one point and two places ahead.

Tottenham have a tough double header ahead, beginning with a trip to ​Wolves on Sunday. Jose Mourinho then welcomes one of his former teams to north London, when Spurs face ​Chelsea in a big derby clash on 22 December.