​Barcelona moved three points clear at the top of La Liga on Saturday ahead of Real Madrid’s game on Sunday, as they overcame Alaves 4-1 at Camp Nou.

The hosts made a bright start to the game, with Lionel Messi seeing his early goal ruled out for offside. They continued to press forward and soon took the lead after 14 minutes through Antoine Griezmann, who fired in an excellent right-footed strike from the edge of the area.

Barça came close to a second seven minutes before half time, with Messi just poking wide following a lightning quick counter-attack involving Griezmann. However, they did double their advantage just before the break as Arturo Vidal rifled home Luis Suarez’s pass.

The second half began in much the same way, with La Blaugrana continuing to dominate proceedings. Griezmann found the net once more only five minutes into the second period, but it was ruled out for offside. However, Alaves pulled one back on 55 minutes through Pere Pons, with the midfielder powerfully heading home.

The home side restored their two-goal lead on 69 minutes, however, as Messi sublimely curled home from outside the area. Luis Suarez made it four five minutes later from the penalty spot, after VAR awarded a spot-kick. Valverde’s men saw out the rest of the game to pick up a valuable three points.

Here’s 90min‘s breakdown of the game.

Barcelona missed the chance to move three points clear at the top of La Liga on Wednesday as they played out an underwhelming 0-0 draw with rivals Real Madrid in the first Clasico of the season. In that game, they managed just the two shots on target.

However, Ernesto Valverde’s men were impressive going forward against Alaves and it didn’t take them long to open the scoring. Griezmann, Carles Alena, Suarez and Messi were all constantly drifting and picking up clever positions, leaving the the opposition’s defence struggling to cope. 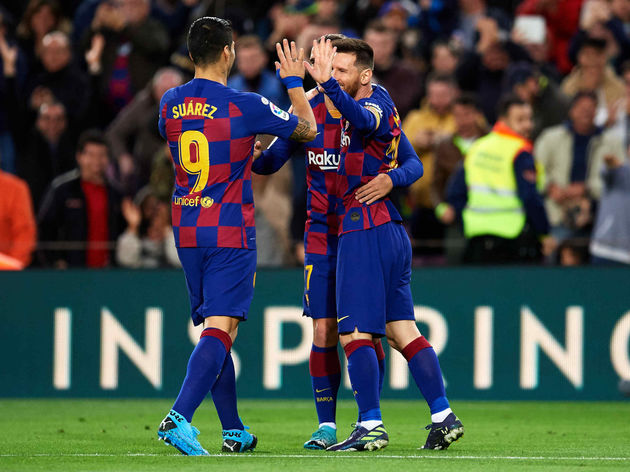 They continued to play positively throughout the game and, ultimately, it was a comfortable afternoon’s work for the team. However, Valverde will be frustrated that his side were not able to keep a clean sheet, despite their dominance.

Alaves found the net against the run of play early in the second half and the hosts looked rattled for a period of ten minutes. In this time, they could have levelled the score to make it 2-2, but were made to pay for their missed chances.

Overall, La Blaugrana were bright going forward and in the end, they picked up a comfortable victory that sees them move three points clear at the top of La Liga ahead of Real Madrid’s tricky clash with Athletic Club on Sunday.

I love how Barça is pushing great numbers into the box while attacking despite Alaves putting a deep block. Griezmann’s goal was a result of the same. #BarçaAlaves

It was an impressive display by Barça and on this occasion, it was Antoine Griezmann who was the standout performer.

The Frenchman looked sharp all afternoon, making positive and driving runs from the off. It was his goal that gave the hosts a deserved lead, a lovely finish with his weaker foot into the bottom corner from the edge of the area. He continued to impose himself on the game, linking up with Messi to great effect. He was at the heart of most things positive for Barça, with his intelligent positioning allowing Jordi Alba to get forward and support the attacks, while he would also act as a link between the midfield and the attack.

While Griezmann was bright going forward, he was equally impressive in his defensive work, tracking back to support the full-backs. An excellent display.

Antoine Griezman has really woken. I always believed he can’t be another Coutinho.

Then.. Imagine if he’s really playing in his position #BarcaAlaves

Barcelona next face a trip to take on Espanyol on Saturday 4 January before hosting Atletico Madrid in the Spanish Super Cup.

Alaves, meanwhile, next take on Real Betis, where they’ll look to bounce back from this humbling defeat.