This decade for ​​Atlético Madrid has been one that will live long in the memories of their fans.

They won their first European trophy in almost 50 years when they won the Europa League under Quique Sanchez Flores in 2010, and since then they have gone from strength to strength under Diego Simeone.

They’ve closed the gap on the two Spanish giants in Barcelona and Real Madrid and even won a La Liga title during the 2013/14 season. Add to that finishing as runners up in two Champions League finals and winning two more Europa Leagues, it has been a highly successful ten years for Atléti.

With this all being considered, here’s Atlético Madrid’s team of the decade… Jan Oblak (GK) – ​The Slovenian is arguably the best goalkeeper in the world and has shone for Los Rojiblancos ever since his move from Benfica in 2014. Having won La Liga’s Best Goalkeeper Award for four consecutive seasons, Oblak has an astonishing 97 clean sheets in 169 La Liga appearances.

Juanfran (RB) – The Spaniard won pretty much everything with Atlético after he joined in 2011. He swiftly became a constant presence in Simeone’s side going on to appear in over 350 games in all competitions before departing for Brazil during this summer’s transfer window.

Diego Godín (CB) – One of the best defenders of the whole decade, Godín epitomised Simeone’s side with his commanding presence, amassing almost 400 appearances during his spell in the capital after signing for Atlético in 2010 from Villarreal.

José Giménez (CB) – The 24-year-old broke onto the scene in the middle of the decade and soon formed one of the best centre-back partnerships in the world with fellow Uruguayan Godín. With plenty of years left in him, Giménez could surpass the achievements his compatriot managed during his stay with Atlético.

Filipe Luis (LB) – Another member of the back four that was signed at the beginning of the decade, Luis became a fan favourite during two separate stays at Atlético – a brief dalliance with Chelsea in between them. He was a constant threat down the left flank and provided much of the width that was needed in Simeone’s system. Koke (RCM) – The current captain and a man who has been at Atlético for his whole footballing career, Koke’s stock has risen exponentially during this decade with excellent performances across the midfield. At current rates, he could become Atléti’s all time appearance maker – having been the youngest ever to reach 400 games for the club.​

Tiago (CM) – The former Portuguese international found his fit in Simeone’s side after underwhelming spells at ​Juventus and Chelsea. He became a feature of the side that won La Liga in 2013/14, appearing in 175 La Liga games for Atlético. He even had a spell as assistant manager after his retirement during the 2017/18 season.

Gabi (LCM) – Another player who seemed to completely characterise the team that Simeone wanted to build. Gabi returned to Atlético in 2011 and was made captain only a year after rejoining. He would go on to lift the ​La Liga title in 2014 and a Europa League crown in his final season in 2018.

Antoine Griezmann (AM) – The Frenchman rose to world footballing stardom during his six year stay at Atlético, winning countless individual and team awards while doing so. Consistently bagging goals and being a provider for others, Griezmann developed into one of the world’s best under Simeone before his £120m move to rivals Barcelona. Rarely does so talented a player put in such a shift for his side. 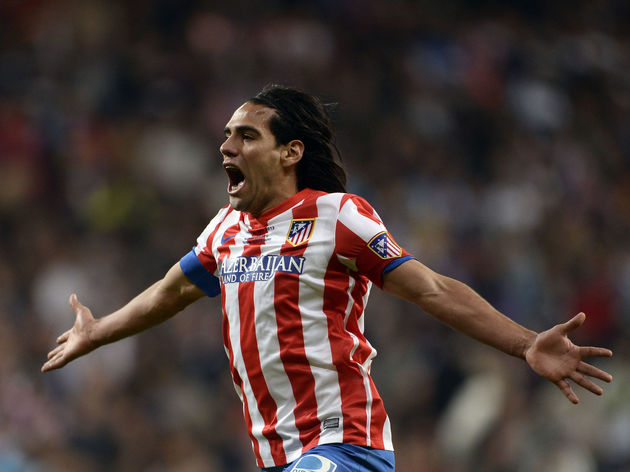 Radamel Falcao (ST) – The Colombian only spent two seasons in the red and white of Atlético, but boy did he make an impression. He was lethal in front of goal, scoring 52 La Liga goals in only 68 games and winning both the Europa League and the Copa del Rey during his time in the Spanish capital.

Diego Costa (ST) –  ​Costa embodies the spirit of Simeone, with his aggressive style and passion for football. He rose to prominence during the title winning campaign, scoring 27 goals to guide Atlético to the title. His second spell with the club hasn’t been quite as successful – but everyone will remember his imperious goalscoring form during the 2013/14 season.