Aston Villa and Manchester City meet at Wembley in the Carabao Cup final on Sunday in a contest to decide the first major domestic silverware of the 2019/20 season.

City have recently dominated this competition by lifting the cup in four of the last six years, while this also remains the last trophy that Villa won way back in 1995/96.

For Villa manager Dean Smith it is a chance to lead out his boyhood team in a Wembley final, while City counterpart Pep Guardiola could win his sixth major trophy in England.

Ahead of the game, which you can watch on Sky Sports on Sunday afternoon at 16:30 GMT, here’s a look back through the round at how both clubs have reached the final…

​With both teams earning a bye in the first round as a result of their Premier League status, Villa were among the 13 top flight sides to enter the competition in round two.

They were paired with League Two’s Crewe Alexandra. Despite Smith putting out a heavily rotated side featuring 10 changes from the previous league outing, Villa had no trouble and were 5-0 up by the time Crewe grabbed a consolation. Substitute Jack Grealish made it six.

In the third round, Villa faced fellow Premier League side Brighton and again prevailed on the road. Smith kept faith with a similar group, but the Seagulls also named a largely young side and first half goals from Jota and Conor Hourihane were decisive. 17-year-old Haydn Roberts pulled one back for Brighton, but Grealish once again came off the bench to make sure.

City got a bye all the way through to round three by virtue of playing in Europe, making short work of second tier Preston on a trip to Lancashire. In a semi-rotated side, Raheem Sterling and Gabriel Jesus netted early, with an own-goal capping off the 3-0 result before half-time.

​City made it through the fourth round of the competition by beating Southampton at the Etihad in their first all-Premier League tie. It was another mixed side named by Guardiola, with goals from Nicolas Otamendi and Sergio Aguero (2) making it 3-0. The Saints later pulled one back.

Villa had a home west midlands derby to contend with when Wolves made the trip to Villa Park. Both sides again rested a number of usual starters and it was the home side that made their advantage count through Anwar El Ghazi and Ahmed Elmohamady in a 2-1 win.

​Villa’s clash with Liverpool dominated the headlines at the quarter final stage of the competition when the Premier League leaders endured a scheduling headache and left a reserve team to contest the game so their first-team stars could fly to Qatar for the FIFA Club World Cup.

Smith made 10 changes to his team from the previous league fixture, but a second-string Villa still showed no mercy to Liverpool’s teenagers. Hourihane and Jonathan Kodjia (2) scored either side of an own goal to make 4-0 at half-time. Off the bench, Wesley made it 5-0 late on.

City survived a slight wobble in their last eight tie, when Oxford of League One cancelled out an opening goal from Joao Cancelo and even threatened to go ahead. A second half brace from Sterling settled any nerves and killed off the possibility of a major ‘cupset’.

​It was a Manchester derby over two legs in the last four, with City ultimately doing most of the work in the first half of the first leg at Old Trafford. Bernardo Silva scored a stunner, Riyad Mahrez doubled the lead and an Andreas Pereira own goal made it 3-0. 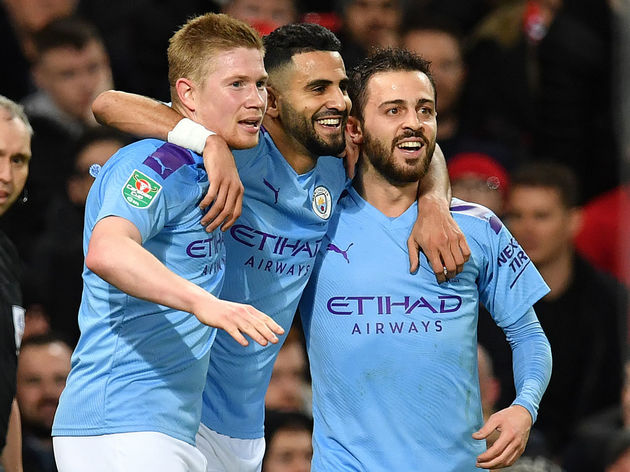 Marcus Rashford pulled one back that night, while Nemanja Matic gave United a surprise 1-0 win at the Etihad in the return leg, but City’s aggregate lead was too great to overcome.

Villa saved their very best work for the semi-final stage and saw off high-flying Leicester over two legs. Grealish was the standout player of the overall tie, impressing in a 1-1 draw at the King Power in the first leg for which is team was largely on the back foot. The return at Villa Park also looked to be heading for a 1-1 draw after Leicester scored a second half equaliser to make it 2-2 on aggregate. Goalkeeper Orjan Nyland was magnificent in the first half, while Trezeguet score the stoppage time winner that sent Villa to Wembley.

Everton 2-0 Boreham Wood: A double by Rondón puts Everton in the quarterfinals