From leaving the ground last night to waking up this morning, a realisation of what that defeat may entail has sparked a change in outlook. Perhaps sooner than initially anticipated.

Let’s face it, Arsenal were never going to win the Europa League this season.

As the glum, shellshocked faces of the Arsenal supporters leaving the Emirates on Thursday night bid farewell to silverware once more, it was actually their hopes of a return to Europe’s elite competition that stung the most.

Missing out on Champions League football again is an asteroid-sized, bitter pill that will require gallons of water to swallow.

This has been a woeful season, more pitiful and depressing than many supporters will have seen in their lifetimes. Unfortunately, the implications of this dire campaign could have the most profound effect on the club in its ​Premier League history.

Bleak is an understatement, but genuinely, in your heart of hearts, were Arsenal going to bypass Inter, Manchester United, Sevilla, Bayer Leverkusen or even Wolves? No, they weren’t.

Olympiacos are not a weak side, but they are a cut below the other candidates vying to be the competition’s outright winners. 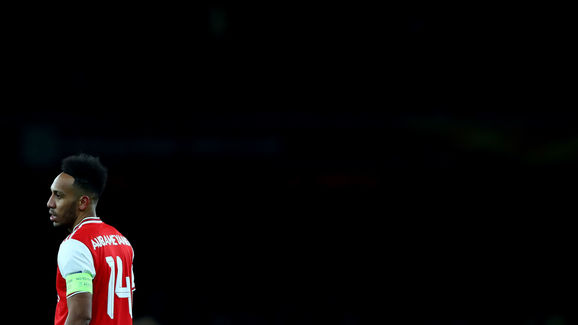 Therefore, with essentially so little left to play for this season – while equally so much – the remit is clear and obvious: fifth place or bust.

Manchester City’s UEFA sentence has left the front door ajar after previously been slammed shut under lock and key. Where securing a ​Champions League berth via league position was a previously laughable concept for the Gunners, that minuscule hope has extended to minute prayer.

But even if the actions of another club has presented Mikel Arteta and his men with just a four-point gap to make up, the task is still a formidable one.

Tough s**t, though, as that’s now all there is left to play for. We’re talking all the eggs in one basket, even if the eggs are out of date and the basket is full of holes.

It was always in the Gunners’ sights to finish in that echelon of the league, but having initially looked to do so alongside an extended European run, the fact is, this might be a good thing.

Our Europa League campaign ends with defeat to Olympiacos.

What was clear from Thursday – and indeed since Arteta took the job – is that the squad is shattered. They’ve been huffing and puffing from the 60th minute on in almost every match. They’re running on fumes.

Arteta’s brand of football demands high intensity for 90 minutes, and while the fruits of that labour have resulted in a significant upturn in form, it has had its drawbacks.

Take Shkodran Mustafi, for example. In the midst of a renaissance under the new boss, he’s been a mainstay in the side each week which, naturally, resulted in burnout as he left the field clutching his hamstring having run himself into the ground over the past few months.

Fatigue isn’t creeping in, it’s bulldozed its way past Finsbury Park station and straight through the shiny Emirates Stadium doors. The lethargic performance against Olympiacos was a sign that the new regime, coupled with playing twice a week, has taken its toll.

Maintaining such demands for a side already crippled with tiredness and injuries was never going to last. How ​Pierre-Emerick Aubameyang hasn’t collapsed into a heap yet with the workload he’s been forced to burden defies logic. 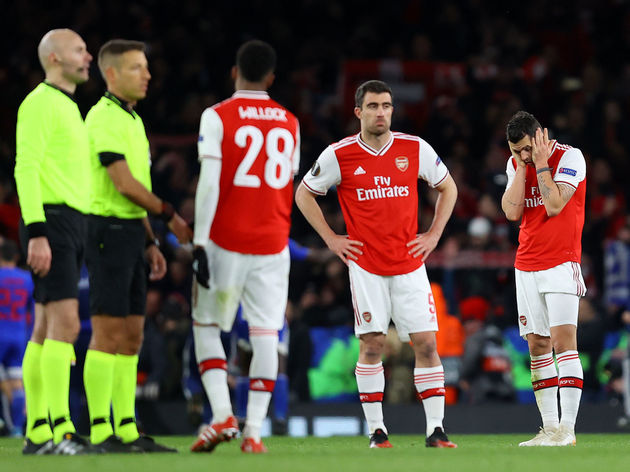 Now there is just one target left. It’s 100 yards away and the bow is crooked, but it’s a target nonetheless.

Just like every side busting a gut – or seemingly doing everything in their power to not reach the promised land – ​Arsenal have a tough run-in.

Away trips to Tottenham, City and Wolves await, while they must also entertain Liverpool and Leicester before the season draws to an end. With just 11 matches left, the odds aren’t particularly stacked in their favour.

But if they were to stand any chance of doing so this season, then regular Thursday trips to every corner of Europe could have severely hamstrung such prospects. Rest and recuperation are paramount with Arteta’s brand of football, and we’ve just seen the consequences of those requirements in brutal fashion.

It won’t be easy – absolutely not – but the burden of Europa League football would have caused it to be a mere pipe-dream. That isn’t to discount the competition, though. Ask any Arsenal fan and they’d all prefer to reach the Champions League via lifting a trophy over their finish in the league. Silverware is what football is all about.

Bid adieu to that now.

Make or break time is upon the club. This season was a rotten, festering corpse who’s only bright light was the performances of a handful of youngsters who temporarily brightened up the mortuary. But there is still time to resurrect it.

Regroup, refocus and rekindle the mentality that Arteta has sought to instil. Sure, the Olympiacos result was bad – very, very bad – but it’s easy to forget that Arsenal are still unbeaten this year in the top flight and improvements are being made with each passing game and training session.

Being able to focus entirely on their domestic duties could actually prove to be a blessing in disguise.

Last season under Unai Emery, Arsenal found themselves in a similar predicament – only in reverse. With a run-in that left Champions League qualification looking like a formality, the club crumbled disgracefully at the final hurdle before getting battered by Chelsea in the Europa League final.

Should Arteta do the opposite and clinch a place in what is now – let’s be honest – the club’s version of the holy grail, it would be a romantic end to his first dabble in football management. He was as hurt as any of the supporters when he left the stadium on Thursday night, but he’ll also have settled his mind and realised the benefits it could have on their Premier League ambitions.

The players can fight.

Or, heck, if all else fails then they can win the FA Cup and return to the Europa League. There’s always that…