Andy Robertson is 9th in 90min’s European Player of the Year series.

If you’re in any way connected with Liverpool, be that as a coach, data analyst, fan or member of the catering staff, then you probably had quite a lot to celebrate in 2019.

If you’re the starting left-back that assisted 13 goals on his way to lifting three continental trophies, then there’s no ‘probably’ about it.

2019 was the year of Andy Robertson, and here are some of the moments that prove it.

Kicking the Year Off With a New Liverpool Deal

Having arrived at ​Liverpool in what was a slightly ‘meh’ £8m move from Hull, it took Robertson some time to settle in. But by the time 2018 rolled around, he was established as first choice, and 12 months later, he was a good deal more than that.

Having starred in the first half of a stellar 2018/19 season, Liverpool’s ‘Great Scot’ brought in the new year with a new long-term deal that keeps him at the club through 2024.

That has since proved to be a wise investment, as his performances continue to go from strength.

‘Who’s Going to the Final?’

With the Reds trailing 3-1 on aggregate in the first half of the second leg of the Champions League semi-finals, a naughty challenge from Luis Suarez forced Robertson off with injury, and having started the game without Roberto Firmino and ​Mohamed Salah, Liverpool were truly beginning to look down and out.

And then on in his stead game Gini Wijnaldum, who scored twice, as a Robertson-less Liverpool went on to clinch a famous 4-3 victory.

When asked for comment, there was more than a hint of retroactive smugness behind his straightforward response. Oh, and then there was the small matter of that final in Madrid.

Having started and lost the final a year earlier in heartbreaking fashion, and having missed out on the ​Premier League title by a single point weeks before, Robbo and co possessed a steely determination to finally take the final step and claim a major honour – and it was Tottenham who fell victim.

A gritty display which required Robertson at his defensive best on more than one occasion saw the Reds see out a 2-0 victory, and claim the European Cup for a sixth time.

PFA Team of the Year The marauding left-back finished the season on 11 Premier League assists, as a key part of a defence that shipped just 22 goals, and kept a record 21 clean sheets.

It was no surprise, then, to see him named in the PFA Team of the Year, as part of Liverpool-dominated back four.

He joined Virgil van Dijk and his assist rival Trent Alexander-Arnold, with Sadio Mané rounding out a Merseyside quartet. 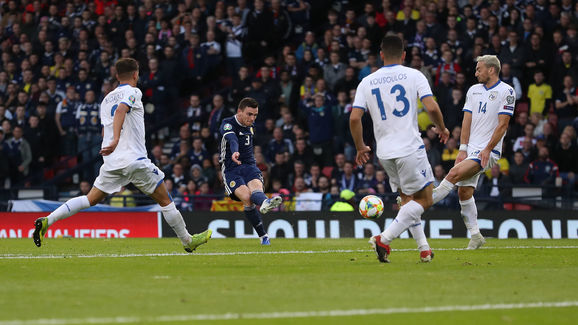 ​The contrast between Liverpool and Scotland could hardly be more stark, but in what was ultimately a dreadful 2019 for his country, there were one or two bright sparks.

He captained the Scots to a successful Nations League campaign, and though their quest for automatic Euro 2020 qualification ended in failure, Robertson’s opening goal against Cyprus in the summer will live long in the memory.

He had been in the press in the weeks leading up discussing his desire to add goals to his game, and he did just that, arrowing a spectacular effort across goal into the top corner from 25 yards out to help his side onto a 2-1 victory. That was the best goal Robertson has scored in his career, but it wasn’t the only one, nor was it the most important.

On the latter note, you could make a case for a couple, but his late headed equaliser against Aston Villa to bail his side out – complete with a proper ‘get that bloody ball and get back up to the halfway line NOW’ celebration – was right up there.

Sadio Mané went on to score the winner, in a game Liverpool probably did not deserve to win, but did so anyway – such is the story of the season so far. And to round things out with a real moment of magic, his cross for Mohamed Salah’s decisive second goal against Manchester City at Anfield will really live long in the memory.

Taking down a cross-field ball from Alexander-Arnold, he advanced down the left flank, and with nothing evidently on, he whipped a vicious left-footed cross in behind the City defence.

Half-way through its trajectory, it appeared he had sensed the movement of Mohamed Salah and picked it out with an impossible pass. The Egyptian arrived to send the ball emphatically past Ederson with the lightest of headed touches, such was the picture-perfect weight on the ball in.