And while David Silva and Fernandinho stopped the Belgian from doing the talking on that occasion, Kevin de Bruyne has continued to talk on the football pitch, enjoying a stellar 2019.

A midfielder blessed with a V12 engine and technical ability that can be matched by very few around, De Bruyne – or KDB – has continued to prove why many regard him as the very best in the Premier League. Despite arriving from Wolfsburg for a fee that was laughed at by many, the 28-year-old has been at the heart of City’s domestic dominance since 2017 – winning two Premier League crowns, an FA Cup and three League Cups during his time at the Etihad thus far.

His freakish athletic ability means that De Bruyne will likely have another half a decade in his physical prime – injuries permitting – and who knows, by the time he’s done we could be talking about one, if not the best all-round footballer we’ve ever seen, especially in the modern era. De Bruyne’s performance against Spurs in the Champions League quarter-final second leg was nothing short of masterful, and if Sergio Aguero had decided to get himself onside in the dying embers, we’d be talking about the Belgian’s display as one of the finest in the competition’s history.

On an incredible night at the Etihad, De Bruyne played a role in all four City goals. He set up Raheem Sterling and Aguero after driving runs through Spurs’ helpless midfield while he utilised his iconic right-hand channel to assist Sterling for his second of the night. For Bernardo Silva’s goal, De Bruyne made an unselfish central run which drew Danny Rose inside, leaving the Portuguese international in acres of space to finish. Admittedly, De Bruyne’s 2018/19 campaign was blighted by injury and he certainly wasn’t as productive compared to other seasons.

Nevertheless, retaining your Premier League crown is a monumental feat and it simply has to be part of De Bruyne’s best moments of the year.

The Belgian made a substitute appearance in City’s 4-1 win over Brighton at the Amex on the final day, as they secured back-to-back crowns despite a relentless challenge from Jurgen Klopp’s Liverpool. With City cruising at 2-0 in their bid to win the domestic treble, Pep Guardiola sent on De Bruyne to heap the misery on Watford.

The Belgian scored the Cityzens’ third, coolly rounding Heurelho Gomes before finishing past Kiko Femenia on the goal line and he quickly set up Gabriel Jesus for their fourth.

After crossing from the right for Sterling’s second of the match and City’s sixth, De Bruyne was awarded Man of the Match for his dazzling second-half display. 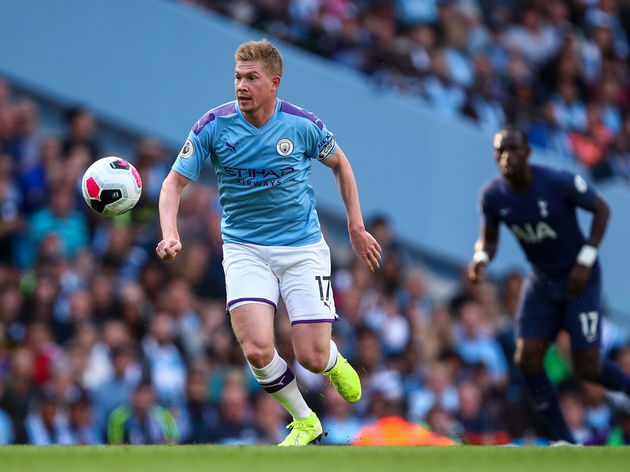 The Belgian was out for blood after missing half of the 2018/19 season and two games into the new campaign, he was already schooling opposition midfielders.

In the first half against what was then Mauricio Pochettino’s Spurs, the Belgium international was almost unplayable as he set up both of City’s goals. Sterling nodding home their first after a sublime back-post cross from De Bruyne with his first touch, then Aguero was the next beneficiary of De Bruyne’s magic as the Argentine tapped in the playmakers driven cross from the right channel.

Constantly finding pockets of space in behind Spurs’ midfield and troubling the north London side’s defence with intricate through balls, De Bruyne proved, yet again, to be a nemesis for the Lilywhites and his display was a sign of things to come this season. With City struggling to break down a sturdy Newcastle backline, up stepped Kevin De Bruyne.

After chesting down a defensive clearance from the Magpies, the 28-year-old proceeded to unleash an absolute thunderbastard from the edge of the area. His strike had too much venom for Martin Dubravka to handle and all the Newcastle shot-stopper could do was tip the ball onto  the underside of the bar and into the back of the net – just to make the finish all the more aesthetically pleasing.

What happened afterwards in that match is totally irrelevant. All you need to know is that the strike was awarded the Goal of the Month for November. Coming into the trip to Arsenal with 14 goal contributions in the Premier League, the Gunners knew that the Belgian was the man to halt if they were to taste victory.

Instead, they gave the City man the freedom of Islington to wreak havoc at the Emirates, as he got on the scoresheet with barely a minute on the clock with a sumptuous half-volley into the roof of Bernd Leno’s net.

After setting up Sterling, again, with a cross from the left, De Bruyne got his second of the match with a perfectly executed left-footed finish from outside the area after brushing aside Matteo Guendouzi.

And although Leno denied him one of the finest hat-tricks in Premier League history as well as Jamie Carragher’s Gary Neville-Fernando Torres moment, it was an incredible display from the former Chelsea man – who’s on course for a spectacular 2019/20 campaign.